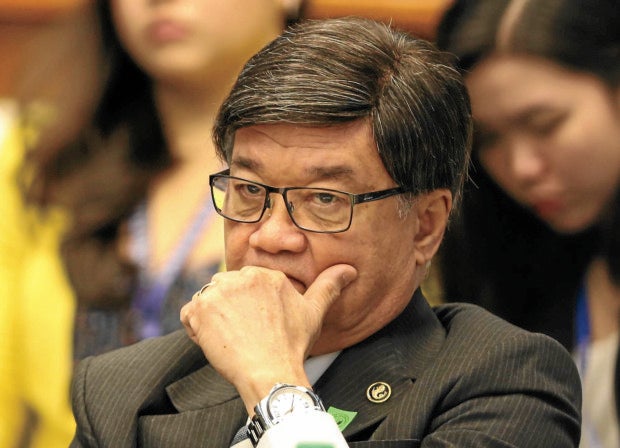 Did a Cabinet official fall victim to another bum steer and aired what turned out to be fake news over the radio?

In a radio interview on Friday morning, Justice Secretary Vitaliano Aguirre II claimed that the car of Lalaine Madrigal Martinez, was “ambushed” on Friday at the Santa Ana race track (now Circuit Makati).

But the Inquirer found no police reports of any shooting incident near the Santa Ana Race track.

The office of Makati police chief, Senior Supt. Dionisio Bartolome, also denied that an ambush incident was reported on Friday.

The station’s Tactical Operations Center where incidents are first reported through radio and even the investigation unit said they received no reports involving a Lalaine Madrigal Martinez.

The Santa Ana police station of the Manila Police District said it had no report of the incident fitting Aguirre’s description.

Aguirre said Lalaine was the wife of convicted kidnapper Noel Martinez, who is currently detained at the military’s custodial center in Camp Aguinaldo, along with other New Bilibid Prison inmates who testified against Sen. Leila de Lima during the House of Representatives inquiry on the illegal drug trade at the national penitentiary during her term as justice secretary.

He also claimed that Lalaine Martinez was the one who informed him that former Sen. Jamby Madrigal and incumbent Laguna Rep. Marlyn Alonte were the ones behind the P100-million offer to Bilibid inmates to retract their statements against De Lima before the Edsa people power anniversary on Feb. 25.

Aguirre said Madrigal had asked her cousin Lalaine to get in touch with  Bilibid inmates.

Madrigal added that she has not met nor has any relation to a certain Lalaine Madrigal Martinez.

Madrigal also described as “bum steer” Aguirre’s claim that she was one of those behind the P100-million bribe attempt.

Madrigal, who is abroad, demanded an apology from the justice secretary, saying  Aguirre’s accusations were “baseless, malicious and outright lies.”