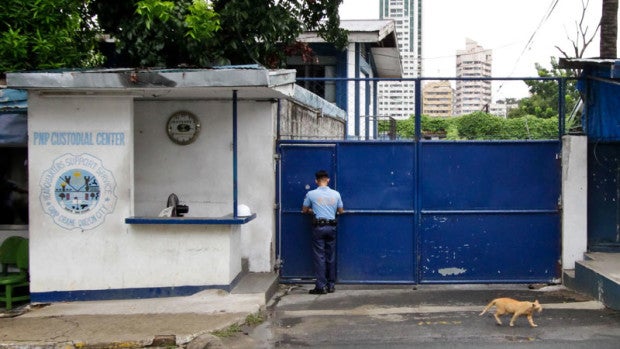 Like any other detainee at the Philippine National Police (PNP) Custodial Center, Sen. Leila de Lima will have to wear the orange garb for inmates and be stripped of the privilege of using communication devices and appliances.

Mobile devices, laptops, and appliances like a television set and air-conditioner will not be allowed inside the cell of De Lima at the heavily-guarded Custodial Center, which is inside Camp Crame, the national headquarters of the PNP.

(“She can’t use metal utensils or mechanical equipment. No communication devices. Cellphones are forbidden. There’s no TV. Just the basics.”)

Bag-ao accompanied De Lima from the time she was arrested until the police brought her to the detention facility, said

“Because of (her) privileged status, she is allowed to bring her own clothes,” she added. ”But she has to wear orange shirt every time she comes out of her cell.”

The visiting days will only be from Tuesday to Friday, from 1 p.m. to 5 p.m., with 10 days notice being given beforehand to the PNP’s Headquarters Support Service.

De Lima will share the same detention facility as former Senators Ramon “Bong” Revilla Jr. and Jinggoy Estrada. But since her cell is in a different compound, she will not have the chance to see her fellow high-profile detainees, Bag-ao said.

She described the interior of the room as similar to that of a “low-cost housing” unit, with a single bed, comfort room, working table, and a ceiling fan.

Among De Lima’s other visitors were Sen. Francis Pangilinan, Sen. Antonio Trillanes IV, and activist priest Fr. Robert Reyes. Former Human Rights chief Etta Rosales tried to visit De Lima, but she was not allowed inside the custodial premises for lack of coordination with the PNP. /atm