Robredo to Duterte: ‘Stop the lies that are distorting the truth’ | Inquirer News

Robredo to Duterte: ‘Stop the lies that are distorting the truth’ 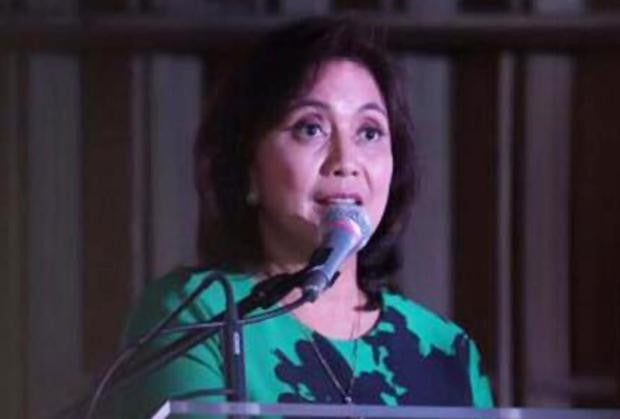 Vice President Leni Robredo delivers a speech at her alma mater, the UP School of Economics, on Friday, Feb. 24, 2017. (Photo from her Facebook page)

The administration of President Rodrigo Duterte has begun to show signs of a creeping dictatorship, beginning with the detention of his fiercest critic, Sen. Leila de Lima.

Vice President Leni Robredo hinted at this, shortly after De Lima’s arrest, in a speech she delivered on Friday at the University of the Philippines School of Economics, her alma mater.

Robredo spoke of the country’s dark history under the martial law regime of President Ferdinand Marcos and made some of her most stinging criticisms against Duterte.

“Some leaders would like us to forget the atrocities of martial law,” she said. “Some leaders are too happy to glorify the dictatorship of Marcos, to revise the history so that he is remembered a hero, and not the thief and murderer that he was.”

“Some leaders want to raise the fist of authoritarianism, to sow fear and discord among ourselves, to divide us with lies, violence, and bloodshed,” she said. “It has begun.”

De Lima’s arrest, she said, showed how far the administration would go to stifle opposition.

“So on Friday the nation woke up to a worrying scene: A senator and a staunch critic of the President was escorted into police custody,” she said. “The message was loud and clear: Anyone who dares speak dissent is not safe.”

Toward the end of her speech, the former Camarines Sur representative directed her statements to Duterte: “Mr. President, we call you to task. In behalf of the Filipino people, whose daily struggles are escalating, we ask you to focus on the war that really matters – the war on poverty. Our people are hungry, jobless and poor. Be the leader you promised to be, and stop the lies that are distorting the truth in our society today.”

She asked the President to use his leadership “to point the nation towards respect for rule of law, instead of disregard for it; to uphold the basic human rights enshrined in the institution, instead of encouraging its abuse.”

In December, Robredo, interim chair of the Liberal Party, quit as housing secretary over policy and political differences with Duterte after she was told by text message to stop attending Cabinet meetings.

She has since expressed her intention to be the “voice of the opposition,” though she had not been able to consolidate Liberal Party forces because many of them belong to the Duterte-controlled supermajority in Congress.

But that may be changing.

At the UP event, Robredo was accompanied by several LP stalwarts, one of few occasions the party came in full force to support her. They included Sen. Francis Pangilinan, who also spoke at the forum; House Deputy Speaker Miro Quimbo; Caloocan Rep. Edgar Erice; and former Reps. Erin Tañada and Niel Tupas.

In his speech, Pangilinan said he found it ironic that on the eve of the 31st anniversary of People Power Revolution, “a critic is being detained.”

“We believe we need to stand guard for her safety and her life are at risk,” he said. “And we know her detention and the charges filed against her are questionable.”

Pangilinan also seemed to hint at the LP’s future course of action on De Lima’s plight.

“In the middle of all this, we need to sit down, talk, engage, discern, and hopefully after discerning, we will act,” he said. /atm