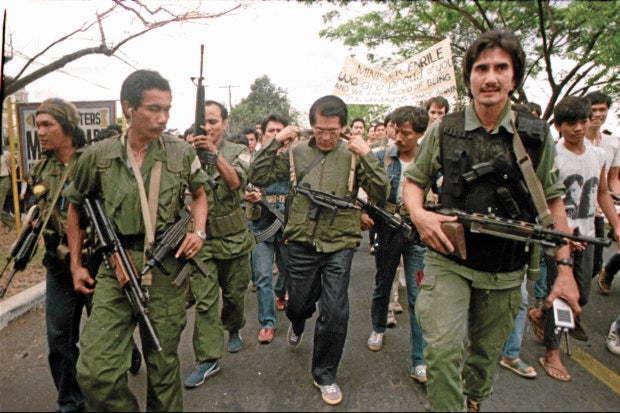 I like to say I was in Edsa in spirit, because there was no way I was going to make it there in person, even if I wanted to.

With my mother and the family (wife Jane and three sons) of my eldest brother, then Col. Gregorio “Gringo” Honasan, I was locked away in a safe house in Quezon City.

I experienced the Edsa People Power Revolution on TV, on radio, and through periodic phone calls my brother made to Jane.

Those calls changed frequently in tone, my sister-in-law would tell us—first sober, saying a quick and possibly final goodbye every time there was news of an attack by Malacañang; jubilant whenever an Armed Forces general and his men would defect; and incredulous when the crowds came out like human shields, protecting the Reform the Armed Forces Movement (RAM) boys with their bodies.

I learned about the magnitude of the Edsa People Power Revolution only later, when we were back out in the daylight.

It was tough enough that, although we had long sensed my brother’s discontent and knew why the RAM existed, Greg told me and my mother little else—in retrospect, as every military family knows, as a matter of security.

I knew his men were undergoing rigorous training, doing midnight jogs in full battle gear even in the midst of peace (or what we thought was peace).

Still, since he was with the government, after the 1986 snap elections, I could join a few anti-Marcos rallies only in secret.

Going out for a haircut

I had just opened the gate to the garage of our family home in Marikina to bring out the car; I was a 21-year-old college senior. My mother and I were going to get haircuts in Cubao.

Suddenly, two familiar cars came, screeching to a halt outside our open gate, one carrying Jane, her three boys and a yaya, the other full of armed men whom we knew; Greg was then chief of security at the Ministry of National Defense.

“(Then Minister of National Defense) Enrile is resigning,” Jane said simply, but with obvious fear, as they carried a few hurriedly packed bags of clothes into the house.

We monitored events on the radio, seated around the dining table, while my other brother Don—seemingly less surprised than we were—began bringing out guns.

Soon, it was announced that then Lt. Gen. Fidel V. Ramos had joined the picture, and that he, Enrile,  and the RAM boys were holed up in Camp Aguinaldo, had declared their defection, and had said they were not going to give up without a fight.

Greg relayed the order that we were to be whisked off to a safe house.

My mother and I threw some stuff into bags and left that afternoon.

The last thing I remember was seeing Don, who had calmly opted to stay to watch the house with a few men, setting up guns, like in a feeble last stand in some spaghetti western.

(We’re a military family; licensed guns, big and small, are no big deal.)

Don died in 1999, and I sometimes still think of how much balls it took for him to do what he did.

The safe house in Quezon City had a landline and relatives welcomed us warmly, plying us with food and making sure our beds were comfortable.

Every ring of the phone had us jumping out of our skin. Greg’s older boys—Kim, then 11, and Martin, 9—understood something scary was going on, and went about quietly, entertaining their oblivious youngest brother Karel and hardly leaving the room they shared.

What I remember most was the roller coaster of emotions; the days and nights flowed into each other, so I couldn’t quite keep track of the dates.

When they presented captured RAM soldiers like Col. Jake Malajacan on TV, we would cry with worry.

When Gen. Fabian Ver spoke of annihilating the rebels in front of an obviously incensed President Ferdinand Marcos, I sank into a corner while Jane sobbed on the phone with Greg, who had called to tell us to be ready for anything—and to be brave.

Similarly, our hopes surged with each defection, including that of the Air Force’s Col. Antonio Sotelo and his planes, and when Jaime Cardinal Sin, in the most remarkably calm of voices, summoned the people to Edsa, like he was just asking them to come to Sunday Mass.

Probably the most terrible moment was the false alarm of the first reported Marcos departure, when everyone thought he had gone—and then, like a really bad dream, he was back on TV, his son in combat fatigues behind him.

That sight almost made me faint.

There was talk that Marcos would bomb Camp Crame at night, so we grew more apprehensive as darkness fell.

I remember looking at my nephew Kim, who said nothing, but kept biting his fingernails.

We couldn’t sleep, and I kept quiet through probably the worst migraine of my life.

My mother looked exhausted as well, but never let go of her rosary.

We had to force ourselves to bathe, change, eat. Jane never swallowed a bite.

Of course, I remember some fun parts. What would Pinoys be without them?

We received word that the French Embassy was offering asylum to all the families of the RAM boys, in case they were all killed.

I like to kid my brother that if they had been “annihilated” according to plan, I’d probably be living in Provençe now, running a vineyard and making my own merlot.

Then there was my clueless dear friend Minnie, whom I called from the safe house.

“Where are you?” she asked.

“Classes have been called off, there’s something happening,” she retorted. “Come, let’s watch a movie.”

To be fair to her, the very next day, when I called my other friend, Maite, who was busy mobilizing people and bringing food to Edsa, I learned that Minnie was on the streets, too.

Finally, the news that Marcos had fled. We were skeptical in spite of the near-hysterical announcements on radio, waiting for Greg himself to call.

Then he did, and amid the screaming and jubilation in the background—“What? Papa, we can’t hear you,” Jane and the boys kept repeating into the phone—he said, “I’ll see you soon.”

Around 9 p.m., our host asked if we wanted to go for a ride through some nearby roads in their tinted van.

I was in a house dress, and I don’t remember who else went for the ride.

I remember deserted streets—the Edsa action was far away—but there were groups of people running and screaming, cars honking their horns.

Then, on a traffic island off  Quezon Avenue, I saw a transvestite in shorts, heels, wig and makeup, dancing and twirling yellow ribbons on sticks like a gymnast.

I heard disco music blaring in the background. I don’t remember the song, but I can’t forget his face, earnest and sweaty, eyes closed.

He danced continuously and feverishly, alternating between sobs and euphoria, and I remember my own tears falling, thinking of how deeply emotional the last few days had been for all of us.

We went back to the safe house, and after a heavy dinner, I think I slept for the next 10 hours. 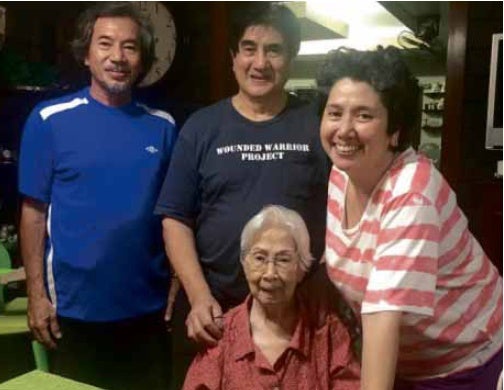 We weren’t allowed to go back home until Feb. 27, I believe.

By then, in Marikina, the guns had been dismantled, and we came upon Don, my other Edsa hero, and his friends having a drink—“Oh, you’re back?” he quipped—and enjoying the tons of food that had been dropped at our house, including lechon manok, buckets of Kentucky Fried Chicken, bilao of pancit, and my friend Maite’s crisis specialty, a beautiful artichoke pasta that she makes for me to this day whenever I’m in the dumps.

There were dishes to wash, tidying up to do—and I remember wondering when I could manage to get my interrupted haircut.

And that’s how our revolution ended 31 years ago.

That’s how I missed Edsa.