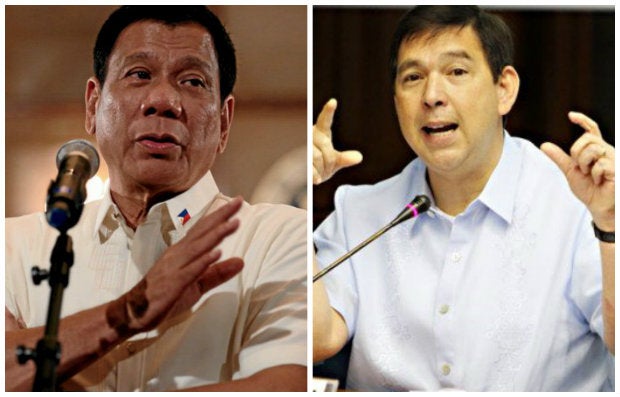 MANILA — Senate Minority Leader Ralph Recto on Wednesday withdrew his resolution proposing amendments to economic provisions of the 1987 Constitution, saying revising the basic law might be used for political ends by the President’s allies.

During a hearing of the Senate committee on constitutional amendments and revision of codes, Recto made a manifestation withdrawing his resolution.

In putting the manifestation on record, Drilon said: “He is totally against any amendment to the Constitution at this point.”

Speaking to reporters after the hearing, Recto said he decided to take back his resolution as the purpose of changing the Charter, based on what he heard, has become “political.”

He is particularly against opening the Constitution to amendments towards shifting the system of government to federalism, a legislative priority of President Duterte. Duterte and his allies, including Senate President Aquilino Pimentel III, have been pushing for a system that would separate the country’s regions into separate states, saying this would encourage equitable growth across the Philippines.

“I’m not in favor of amending the charter at this point in time.  I’m in favor of proposing amendments to the economic provisions in the charter. But I know that the purpose today is more political. So I don’t want to be a part of that, and that’s why I withdrew my resolution,” Recto said.

He warned that turning the Philippines into a federal republic would be destructive to the existing state of affairs. He said he was only in favor of amending the Constitution as far as revising economic provisions.

“We know that the position of the President’s party is to amend it for political purposes, particularly federalism. And I think that will do more harm than good,” Recto said.

“That will be additional bureacracy, additional taxes, additional red tape, and you know if you’re growing by 7 to10 percent today —  7 percent real growth, 10 percent nominally — by doing that, you might destroy the economy,” he said.

Senate hearings on constitutional change are meanwhile expected to continue as other senators have pending proposals toward such end.  SFM

ADVERTISEMENT
Read Next
Construction of P230-M Lucena underpass set to begin
LATEST STORIES
Beggar dead in Quezon hit-and-run incident
Prince Harry: ‘No other option’ but to cut royal ties
‘It’s not my shame’: Why Filipino women are calling out sexual misconduct on social media
‘1917’ takes top honor at the Producers Guild Awards
Duterte promises to look for funds to establish rail transport in Cebu
MOST READ
Panelo: Duterte only wants to emulate strong political will of Marcos
Marcos monument beside Aquino’s stirs Tarlac town
Palace: Crisis over ABC-CBN franchise unlikely
Taal Volcano evacuees warned against going home
Don't miss out on the latest news and information.