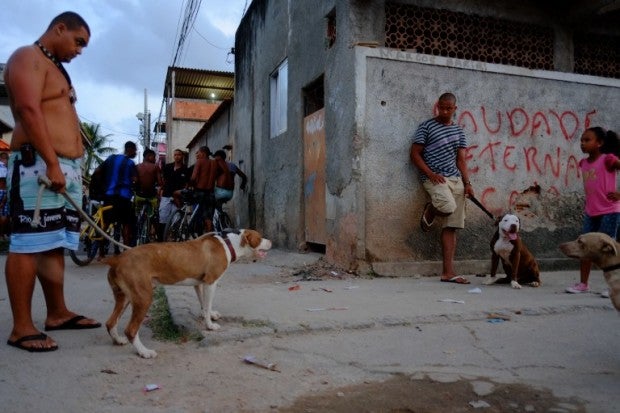 Residents of Rio de Janeiro’s Cidade de Deus shantytown gather with their pit bull dogs, on Feb. 23, 2013. Five pit bulls reportedly killed a neighbor of their owner in Spain in what police described as a horrific attack. AFP

MADRID, Spain — A Spanish man has been mauled to death in what police believe was a vicious attack by his neighbor’s five dogs.

The 66-year-old was discovered by his son lying on the ground covered in wounds “caused by animal bites” which police suspect were the work of the dogs, all crosses between pit bulls — considered dangerous — and bull terriers.

The victim left his home in Beniarbeig, southeastern Spain, on Saturday to tend to his vegetables nearby, the Guardia Civil police force said in a statement on Tuesday.

When his son realized he had been gone a long time, he went to look for him and found him lying on the ground in a “horrific scene”, they added.

Police said the state of his arms and legs suggested the man fought hard before he died.

There are no dangerous wild animals in the area, and suspicion soon fell on a neighbor whose dogs have caused problems in the past.

“The dogs didn’t have any trace of blood on them, but police realized that one of them was soaking wet, as if it had just been washed,” the Guardia Civil said.

“The owner alleged he had fallen in the pool.”

Police took DNA from the dogs to confirm whether they killed the man. If they did, the owner could face charges of involuntary manslaughter.

The dogs, meanwhile, were taken to a shelter where they bit a worker and destroyed the cage they were kept in, police said.

Spain, like many other countries, strictly regulates the ownership of potentially dangerous dogs. Potential owners have to undergo physical and psychological tests to make sure they are fit to own them.

The dogs have to be muzzled in public places and must be kept on short leashes. CBB