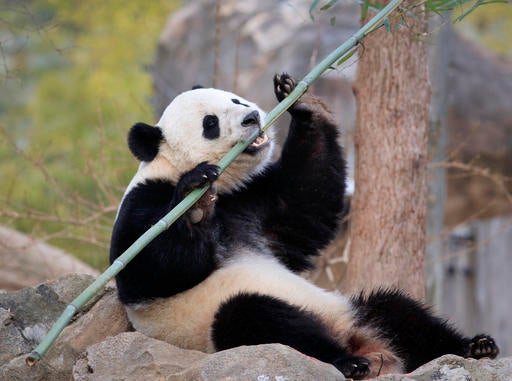 Bao Bao, the beloved 3-year-old panda at the National Zoo in Washington, enjoys a final morning in her bamboo-filled habitat before her one-way flight to China to join a panda breeding program, Tuesday, Feb. 21, 2017. AP FILE PHOTO

One of Washington’s most popular residents left town on Tuesday: Bao Bao, the National Zoo’s uber-popular young female panda, headed to her new home in China.

Bao Bao left Dulles International Airport outside the US capital on a specially outfitted cargo plane for a 16-hour nonstop flight to the Chinese city of Chengdu, home to a special research base for giant panda breeding.

Two zoo personnel will travel with the panda — along with about 30 kilos (65 pounds) of food — mainly bamboo, but also apples, cooked sweet potatoes and special biscuits.

Once in China, the 3.5-year-old Bao Bao — born in August 2013 at the National Zoo — will stay in quarantine for about a month, before entering the breeding program.

About 60,000 panda lovers visited the zoo over the weekend to say farewell to Bao Bao, some of them traveling long distances. Her departure was shown on Facebook Live on Monday.

Most giant pandas around the world are on loan from China. Any panda cubs born abroad, like Bao Bao, are sent back to China before they turn four.

The National Zoo has played host to pandas since the early 1970s.

An estimated 1,800 pandas live in the wild, mainly in China’s Sichuan province.

Read Next
Gabriela to Gina Lopez: Tap mineral wealth to spur PH industries
EDITORS' PICK
Nestlé Philippines’ ‘NESCAFÉ Plan’ bags Grand Anvil at PRSP 56th Anvil Awards
Smart reinforces superiority with best speed and mobile video experience in PH
Every Filipino home can now be a smart home with realme TechLife
New 3,045 COVID-19 cases push PH total active cases to 40,074
LTO’s P500-M deal for screws draws scrutiny
How to lose a PH genius: Wesley So officially a US citizen
MOST READ
How to lose a Filipino genius: Wesley So officially a US citizen
US lays out list of aid to ‘satisfy’ Duterte following VFA payment demand
Robredo on Sara Duterte leading poll surveys: Why are Filipinos drawn to leadership of this kind?
Rights lawyer survives attack by playing dead, loses all case files
Don't miss out on the latest news and information.