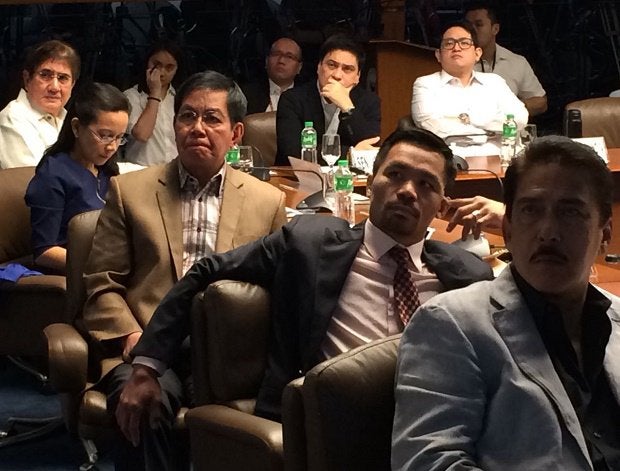 In this Dec. 7, 2016 file photo, Sen. Panfilo Lacson and other senators examine information presented about the Nov. 5, 2016 death of detained drug suspect and Albuera, Leyte Mayor Rolando Espinosa Sr. Killings of drug suspects have become a hot issue again after retired police officer Arturo Lascanas admitted being the head of the Davao Death Squad and alleged that they killed criminals on the orders of former Davao City mayor and now President Rodrigo Duterte. LYN RILLON/INQUIRER

Senators kept mum after the session was adjourned just before 5 p.m., after the lawmakers held a more than an hour-long caucus.

The meeting happened after Sen. Richard Gordon, chair of the powerful Senate blue ribbon committee and committee on justice and human rights, called for a recess 12 minutes into the session.

“What I can tell you is that we want to cool our heads first,” Pacquiao told reporters late afternoon Tuesday.

“We adjourned early so that we could think about what we want to decide on.  There are many considerations that we have to decide on. We did not decide immediately because we were all emotional,” he said.

“Before we make any decision, we should first relax,” he added.

He did not say what contentious issues caused tempers to flare up at the meeting, but one hot topic at the chamber is whether the Senate should initiate a fresh investigation into allegations that SPO3 Arturo Lascañas made on Monday, saying President Duterte had ordered the murder of critics and crime suspects during his time as Davao City Mayor.

The Senate is dominated by the President’s allies.

“Perhaps tomorrow, we can solve the problems that we have to think about… It’s hard to decide when you’re emotion… We did not just talk about one thing… the opinion of many were considered, the ideas of not just one person but of all of us were considered,” he said.  SFM