Three counts of illegal drug trading filed by the Department of Justice (DOJ) against Sen. Leila de Lima were raffled off on Monday to three separate branches of the Muntinlupa City Regional Trial Court (RTC).

The judges have 10 days to determine probable cause to issue arrest warrants for the senator, who has been accused of protecting and profiting from the illegal drug trade in New Bilibid Prison (NBP) when she was the justice secretary.

Dayan was alleged as her bagman while Ragos confessed to delivering millions of drug money to De Lima’s house.

Corpuz will tackle Criminal Case No. 17-166 in which De Lima’s coaccused is Jose Adrian “Jad” Dera, who is said to be her nephew.

The cases were based on the complaints filed by the Volunteers Against Crime and Corruption (VACC), former NBI Deputy Directors Reynaldo O. Esmeralda and Ruel M. Lasala, inmate Sebastian and the NBI.

The complaints were built upon testimonies from the House of Representatives’ inquiry last year into alleged drug proliferation in NBP.

De Lima is facing three counts of violation of Section No. 5 of the Comprehensive Dangerous Drugs Act of 2002 in relation to trafficking and criminal liability of government officials.

“Not only did former Secretary De Lima allow ‘shabu’ (crystal meth) to come and go in and out of NBP, which was under her control and supervision; worse, she facilitated and participated in large-scale drug selling and trading as a principal by inducement by promising protection in exchange of drug sale collections,” according to the VACC affidavit.

De Lima said her lawyers would question the jurisdiction of the Muntinlupa courts, insisting the Office of the Ombudsman should conduct the investigation. 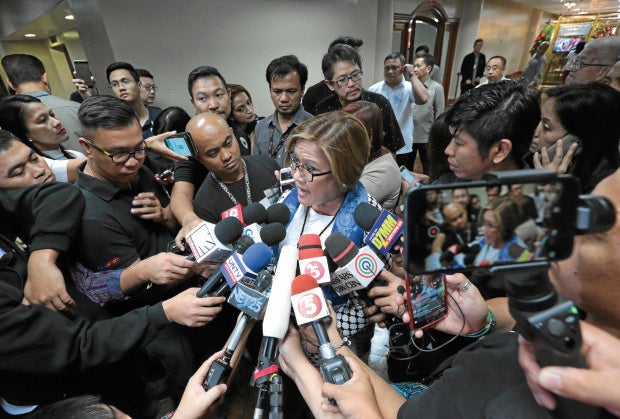 QUESTIONOF JURISDICTION Sen. Leila de Lima insists theOffice of the Ombudsman, not the courts, should handle the criminal cases filed against her. —GRIG C. MONTEGRANDE

She said the DOJ had forced the filing of the cases in the courts knowing that this was “procedurally wrong based on existing law and jurisprudence.”

De Lima said the DOJ did this in the hope that an arrest warrant would be issued against her.
She said the DOJ indictment was laughable and “a stretch.”

If the courts decide to arrest her, she said they should ensure her safety, pointing out that as justice secretary she had “stepped on toes of big people.”

She said she did not want to be detained in Camp Crame or inside the Philippine National Police premises.

She said she would want to be detained in a facility of the Armed Forces of the Philippines.

“I think I can trust more the AFP compared with the PNP,” she said.

Solicitor General Jose Calida on Monday said the DOJ had the authority to “investigate and file drug charges” against De Lima.

Citing the Supreme Court’s ruling in the coup charges against Sen. Gringo Honasan in connection with the 2004 Oakwood mutiny, he said the Administrative Code authorized the DOJ “to investigate the commission of crimes, prosecute offenders and administer the probation and correction system.”

“The power of the Ombudsman to investigate the illegal activities of public officials, including Senator De Lima, is concurrent with the power of other government agencies, such as the DOJ,” Calida said in a statement.

He said the senator was wrong in claiming that the charges against her should have been filed in the Office of the Ombudsman.

Moreover, he said Section No. 90 of Republic Act No. 9165, or the Comprehensive Dangerous Drugs Act of 2000, stated that regional trial courts “have the jurisdiction to exclusively try and hear cases involving illegal drug activities.”

Argued Calida: “Since Senator De Lima is facing drug charges, which has no relation to her office, she should be tried before the regular courts and not in the Sandiganbayan.”

Around 30 supporters went to the Muntinlupa RTC and engaged VACC volunteers in a shouting match.

VACC founding chair Dante Jimenez said his group would appeal to the judges to commit De Lima to a regular jail so she could see the conditions in the cramped prisons.

“The primordial consideration would be for the safety of the person arrested,” Pimentel later told reporters. The chamber will reserve its comments on De Lima’s case “until something more concrete happens” in the court proceedings. —WITH REPORTS FROM MARLON RAMOS AND CHRISTINE O. AVENDAÑO