(Updated) Thirteen college students and a bus driver were killed after a tourist bus carrying around 50 people bound for a research field trip in a resort in Tanay, Rizal, bumped into an electrical post, according to the Tanay Police.

The fatalities, four of them female, were college students from Bestlink College of the Philippines in Quezon City.

According to Erwin Gascon of the Tanay police station, the bus (plate number TXS 325) was traveling along Sitio Bayucal in Barangay (village) Sampaloc in Tanay when the bus allegedly lost its brake and bumped into a post around 8:45 am.

In a separate interview, Carlos Inofre of the Tanay town government said the bus was traversing the downhill road when the driver reportedly lost control of the bus after its brakes failed.

He said the driver deliberately hit a roadside post to stop the bus. 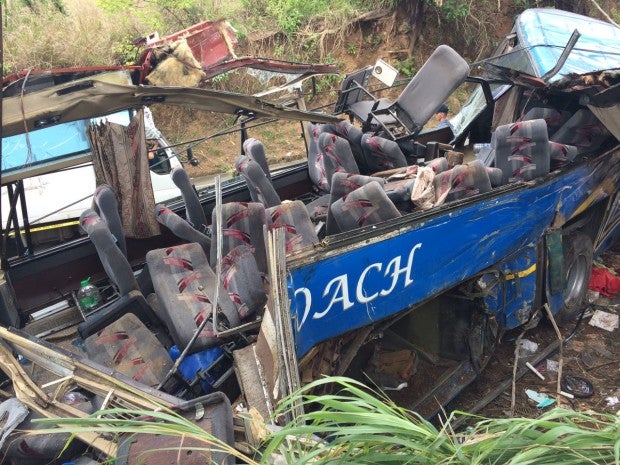 “They could have been running too fast that when they hit the post, the impact was too strong the roof of the bus almost got detached,” Inofre said.

The students were bound for a camping activity at Sacramento Adventure Camp in Tanay, according to Berlito Bati Jr, training officer of the Tanay MDRRMC.

Bati said the injured were brought to following hospitals: one was brought to Camp Mateo Capinpin, six to Tanay General Hosptial, one to Tanay Community Hospital, 17 to Tanay Provincial Hospital and 13 others to another hospital. All the victims who needed serious treatment will be transferred to Amang Rodriguez Memorial Medical Center.

The bus was totally wrecked especially on its left side.

The driver, who was critically injured, was declared dead shortly before 12 noon, according to the Rizal Municipal Disaster Risk Reduction and Management Office.

A school official, who requested anonymity for lack of authority to speak to reporters, said the victims were supposed to attend a camping tour in a resort in Tanay as part of the National Service Training Program.

“There were nine buses (all in all). The rest of the students were safe and were already at the resort,” she told the Inquirer by phone.

School officials were already on the site of the accident.

A student said they left Bestlink College of the Philippines around 6 a.m. for a field and camping work in Tanay, Rizal.

An investigation of the accident is ongoing. RAM/rga

26 hurt as bus falls off bridge in Quezon