26 hurt as bus falls off bridge in Quezon 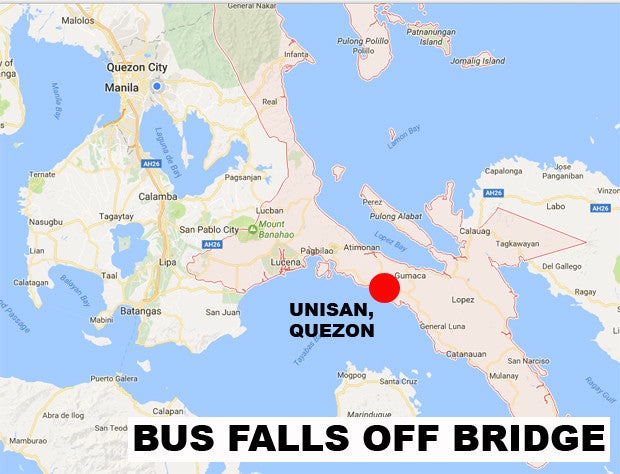 The map shows the town where a Manila-bound DLTB bus reportedly fell off a bridge in Unisan, Quezon. Police said 22 passengers were hurt in the incident. GOOGLE MAPS

LUCENA CITY — At least 26 people were hurt when a Metro Manila-bound bus fell off a bridge in Unisan town in Quezon province early Saturday, police said.
Senior Supt. Rhoderick Armamento, Quezon police director, said the DLTB bus (AQA 6765), driven by Consta Magat, was on a bridge along the Bondoc Peninsula Highway when it swerved and fell off.
Police said the bus, which came from the Bicol region, used the Unisan route after it took a detour in Gumaca town because a vehicular accident in Atimonan town rendered that section of the national highway impassable.
Investigator SPO1 Emmanuel Gabuco said the bus driver could not recall what transpired before the accident happened.
“It seemed that he fell asleep. He was negotiating a straight section of the highway but he occupied the other lane and eventually [fell off the] bridge,” Gabuco said.
He said one of the passengers, Axel Tuita, 52, who suffered a head injury, was transferred in a hospital in Lucena City.
The rest of the injured passengers have been discharged from a hospital in Unisan. CBB