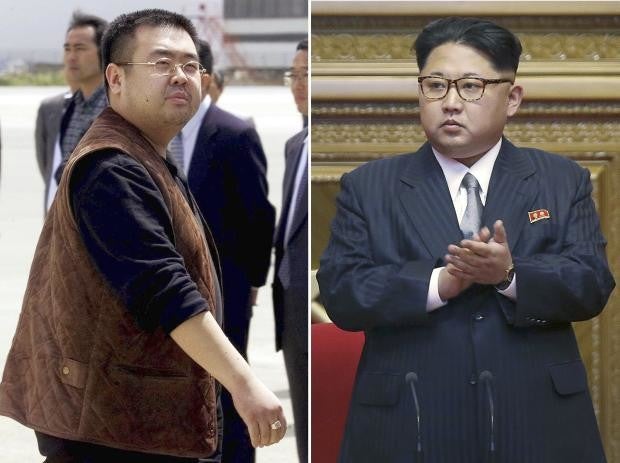 This combination of file photos shows Kim Jong Nam (left) exiled half brother of North Korea’s leader Kim Jong Un, in Narita, Japan, on May 4, 2001, and North Korean leader Kim Jong Un on May 9, 2016, in Pyongyang, North Korea. Kim Jong Nam, 46, was targeted Monday, Feb. 13, 2017, in the Kuala Lumpur International Airport, Malaysia, and later died on the way to the hospital according to a Malaysian government official. (Photos by SHIZUO KAMBAYASHI and WONG MAYE-E/AP)

SEOUL, South Korea – Membership of North Korea’s ruling dynasty brings enormous privilege, but for anyone who falls foul of the power games there is a potentially fatal price to pay.

The assassination of leader Kim Jong-Un’s elder half-brother Jong-Nam in Malaysia is likely to leave other estranged and exiled relatives casting some increasingly anxious glances over their shoulders.

Chief among them is the murdered man’s son Han-Sol, who lived in exile with his parents in the Chinese territory of Macau, and who with his impeccable bloodlines could be seen as a rival figurehead in a state roiled by bloody purges.

“As Kim Jong-Un’s reign of terror continues, some elites in Pyongyang have started to think about possible alternatives,” said Koh Young-Hwan, a former North Korean diplomat who is now a Seoul-based commentator on North Korea affairs.

“So Kim Jong-Un must have concerns about such figures. Now Jong-Nam is dead, you can say his son is also in great danger.”

Han-Sol, 21, is believed to have graduated from his studies at the Science Po University in France but his current whereabouts are unknown.

Some analysts believe China was keeping the family under its wing in case it needed a friendly figure to serve as replacement leader in the event of upheaval in the North.

“China has been protecting Jong-Nam and his family. Therefore, he was detested all the more by the North’s leader”, said Kim Sung-Min, a high-profile defector who operates an anti-Pyongyang propaganda radio station in Seoul.

Back in 2012, when at school in Bosnia, Han-Sol labelled his uncle Kim Jong-Un a “dictator” in an interview in which he appeared bright and articulate and hinted at a future role in his homeland.

“I have always dreamed one day I will go back and make things better, make it easier for all the people there,” he said.

“My dad was not really interested in politics,” Kim said when asked why his father was passed over for the dynastic succession in favor of his younger brother.

Ahn Chan-Il, a former North Korean military official and the head of the World Institute for North Korean Studies in Seoul, said that after the death of Jong-Nam, his son now had a target on his back.

“He has remained quiet for a couple of years after criticizing the North once. But now that his father has been poisoned to death, he will start speaking out again someday to criticize the regime,” he said.

The Kim family tree is littered with figures who met violent deaths or were forced into exile after being marked out by a regime which has never loosened its grip on power in three generations.

Jong-Nam’s death evoked the fate of Jang Seong-Taek, a one-time number-two and uncle of the young ruler, who was executed in Pyongyang in 2013 for treason and corruption in a brutal display of who was now in charge.

Jang is known to have served as Jong-Nam’s protector and provider, bankrolling the playboy’s profligate life style.

The Malaysian assassination may be straight out of the pages of a spy novel, but North Korea has a long history of spectacular targeted killings including a 1968 commando attack on South Korea’s presidential Blue House.

Yi Han-Yong, Kim Jong-Nam’s cousin, was shot dead by two assassins in 1997 outside his home near Seoul after he defected in 1982 and published a memoir revealing details of the Kims’ private lives.

Others have been sent packing despite posing no apparent challenge.

Kim Jong-Un’s uncle, 62-year-old Kim Pyong-Il, has been living in quasi-exile for the past three decades, mostly in Eastern Europe.

Currently serving as ambassador to the Czech Republic, he was once tipped as the North’s next leader.

“It’s long been a taboo to talk about him and any official who tries to befriend Pyong-Il is subject to punishment”, said the defector Kim.

Jong-Un’s brother Jong-Chul, 35, is also known to be living in near-exile, travelling abroad and keeping a discreet distance from politics. He was spotted watching British rockstar Eric Clapton perform in London in 2015.

“Although Jong-Chul is older than Jong-Un, it is highly unlikely that he will play any significant role in the North,” said Thae Yong-Ho, former North Korean deputy ambassador to London who defected to the South last year.

“Had he been born to an ordinary family, he might have become a good guitarist,” he quipped.