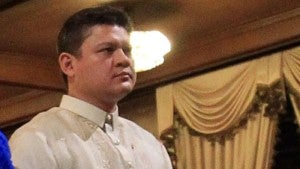 “If this senator, whose name is not worth mentioning, could prove that I have those millions in the said bank accounts, then I will give them all to the victims of the earthquake in Surigao,” Vice Mayor Duterte said in his statement.

He noted that, during the election campaign, Trillanes had also accused him of being being a drug user.

“And when I had proven that I am not, now he accuses me of having millions in questionable wealth,” the vice mayor said.

“If I may suggest for him to take a psychiatric test as something is very very wrong with his mind,” he added.

He dared Trillanes to just give up his post, saying: “Kung gusto mo magresign Senator Ugok, magresign ka na. Huwag ka na madami pang dahilan. You are a useless senator and the people of the Philippines no longer believe you. You can rot in hell for all we care!” /atm