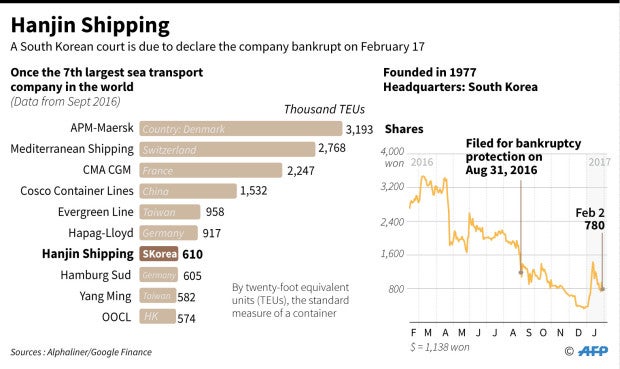 Graphic on South Korea’s Hanjin Shipping, once the world’d 7th biggest shipping company due to be declared bankrupt on Friday. Photo from AFP.

SEOUL, South Korea – Hanjin Shipping will declare bankruptcy Friday, with the former titan of the global shipping industry and one of South Korea’s powerful family-run “chaebol” finally sinking under billions of dollars of debt.

As it heads to a Seoul court to be delivered its last rites, the firm is bereft of assets and has just a few dozen employees on its payroll — a far cry from its heady days as the country’s top sea transport company riding the waves of a booming economy.

Rocked by a slump in global trade – particularly in the past three years – and a growth slowdown in China, Hanjin filed for bankruptcy protection in August after creditors refused to further help it service $5.37 billion of debt.

But the seeds for its demise may have been sown when its owner’s widow took the helm in 2007, despite being a self-confessed housewife with no experience, and highlight dangers inherent in the “chaebol” that dominate South Korea.

Choi Eun-Young became CEO after the death of her husband Cho Sun-Ho, a son of the Hanjin Group founder Cho Choong-Hoon, and soon embarked on an expansion drive while ramping up fees, buoyed by a booming shipping industry.

However, as the global financial crisis set in the company began to struggle, forcing Choi to stand down and her brother-in-law Cho Yang-Ho take over in 2014.

During a parliamentary hearing in September last year into the company’s slump, Choi broke down saying: “I had no expertise as I had been stuck home as a housewife.”

But by then the rot had begun to sink despite millions of dollars being piled into the firm.

Its bankruptcy filing last year sent shockwaves around the world, with most of its fleet of 141 ships banned from docking in the US, China and many other countries because of failure to pay ports for their services.

Chung Sun-Sup, CEO of Chaebol.Com, a website that tracks corporates assets and practices, said the case highlights the flawed corporate governance of chaebol.

While credited with leading the country’s fast economic development over the past four decades, their father-to-son succession exposes them to growing risks in the increasingly competitive markets, Chung said.

“Chaebol members succeed on the basis of family ties rather than competence,” he said. “Choi failed to take actions before growing signs of distress that began to appear several years ago.”

“Other executives were unable to speak up” owing to the country’s rigid top-down corporate culture.

A similar crisis of management is playing out at Samsung Electronics, South Korea’s biggest company that accounts for 17 percent of its gross domestic product.

Its handling of last year’s Galaxy Note 7 saga, which saw it recall 2.5 million of the devices owing to exploding batteries, cost it billions of dollars and tarnished its once-stellar reputation.

Analysts said the issue came as Samsung navigates a complex generational leadership transfer, with chairman and family patriarch Lee Kun-Hee bedridden since 2014, leaving his son and heir apparent, J.Y. Lee in charge during the disaster.

And economist Song Deok-Jin warned the problems have been made more stark as the founders’ grandchildren come to the fore.

Founders had the chance to educate their sons in the field, teaching them the virtue of diligence and the importance of close communications with their employees and others.

But the third-generation owner-executives were often feather-bedded, being raised isolated from the ordinary world, said Song.

“After finishing school, they quickly go up the corporate ladder to executive posts no matter whether they are really qualified for the job”, he said.

“And it was a bad luck for Hanjin Shipping to have a widowed housewife as CEO who had no managerial capabilities at all.”