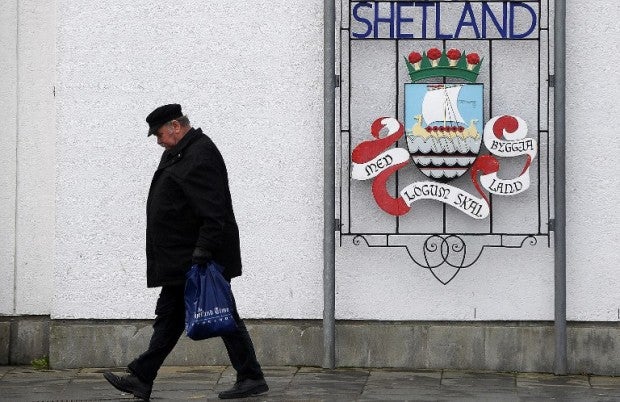 A man walks past a “Welcome to Lerwick” sign in Lerwick, Shetland Islands, on February 4, 2017. Of all the ramifications of the Brexit vote, the fate of the Shetland Islands in the North Atlantic and their oil fields and fisheries may not top the list for negotiators in London and Brussels. But the prospect of a new bid for Scottish independence as Britain leaves the EU is making some residents of these rugged islands think again about whether they would be better off alone. Photo from AFP.

LERWICK, United Kingdom – Of all the ramifications of the Brexit vote, the fate of the Shetland Islands in the North Atlantic and their oil fields and fisheries may not top the list for negotiators in London and Brussels.

But the prospect of a new bid for Scottish independence as Britain leaves the EU is making some residents of these rugged islands think again about whether they would be better off alone.

“It would be wonderful,” Andrea Manson, a Shetland councilor and a key figure in the Wir Shetland movement for greater autonomy, told AFP at the guesthouse she runs, the Mid Brae Inn.

The movement’s name means “Our Shetland” in the local Scots dialect, a derivation of Middle English which has replaced the islands’ original Germanic language, Norn.

The remote archipelago, already fiercely independent in spirit, is geographically and culturally closer to Scandinavia than to Edinburgh, and politically more aligned with London and Brussels.

In the past 1,300 years, Shetland has been overrun by Scandinavian Vikings, pawned to Scotland as a wedding dowry by Denmark, subsumed into the United Kingdom in 1707, and dragged into the European Economic Community against its will in 1973.

The Shetlands were the only part of Britain, along with the Western Isles of Scotland, that voted against EEC membership in a 1975 referendum.

Control of the seabed

Many Shetlanders are skeptical of Scottish separatism.

In the final tense days of the 2014 independence referendum, the local MP Alistair Carmichael, who was minister for Scotland at the time, said the islands could try to remain part of Britain if the rest of Scotland left.

In the end, 55 percent of Scots voted to stay in Britain. The unionist vote in the Shetlands was 63.7 percent — one of the highest levels in Scotland.

Now Scottish First Minister Nicola Sturgeon has warned that a second independence referendum is “highly likely” following the Brexit vote — and Shetland is once again considering its position.

“We would like control of the seabed around us, the fishing ground around us, and the freedom to get rid of some of the bureaucracy that comes down from the EU, Westminster and the Scottish parliament,” Manson said.

“Our seas are being plundered by foreign boats. We also contribute an enormous amount of money to the national economy through taxes, through the oil revenues, and yet we don’t get back our fair share.”

Scotland has around 60 percent of the EU’s oil reserves and the second-largest volume of proven natural gas reserves, most of it located around Shetland.

“I don’t suppose we would ever be allowed full independence,” Manson said, adding: “In an ideal world we would be a British overseas territory. We would be to Britain what Faroe is to Denmark.”

The Faroe Islands lie about 200 miles (320 kilometers) northwest of Shetland and have autonomous status within the Kingdom of Denmark.

They have an almost identical landmass to Shetland but twice the population, and many Shetlanders envy the archipelago’s independent parliament and vast sovereign waters.

The Faroe Island will hold a referendum in April 2018 on a new constitution that would give the territory the right to self-determination.

Power to the people

Tavish Scott of Scotland’s Liberal Democrat party, who represents Shetland in the Scottish Parliament, said he understood the desire for autonomy.

“Shetland certainly explored — and I think again will explore — what kind of constitutional future it wants,” he told AFP.

But Scotland’s nationalist government is keen to retain Shetland as a jewel in the economic crown of an independent Scotland.

Maree Todd, a Scottish National Party lawmaker, told AFP that the party could discuss Shetland’s sovereignty, but that she believed it would be better off as part of an independent Scotland.

“Of course I think it is worth discussing,” she said, adding that islanders are not “entirely sceptical” about the prospect of Scottish independence.

“We want power to come back to Scotland, not just to Edinburgh but to the people of Scotland,” she said.

Read Next
‘There was a lot of blood’: Myanmar sisters scarred by abuse
EDITORS' PICK
PH COVID-19 caseload nears 430,000 as 10,579 more patients recover
Smart Prepaid encourages the youth to take their passions to the next level and ‘Live GIGA’
Sotto checking alleged bid to let Comelec waive safeguards in automated election law
Singaporean gives birth to baby with COVID-19 antibodies — report
Experience clearer calls nationwide with Smart VoLTE
Arthaland’s property management arm utilizes Amazon Web Services to enhance delivery of service
MOST READ
April Boy Regino passes away at 59
Año: Gov’t to conduct fact-finding on mass gatherings attended by Roque, Pacquiao
‘What is mine is hers,’ says Matteo on sharing finances with his Popstar Royalty wife
Low pressure area spotted
Don't miss out on the latest news and information.