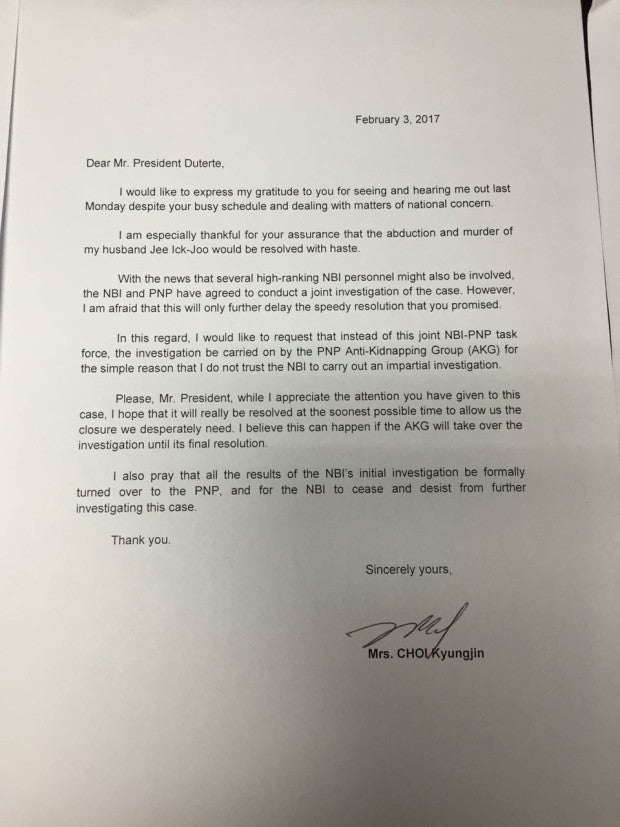 A copy of the letter of Choi Kyungjin, wife of slain South Korean businessman Jee Ick-joo urging President Rodrigo Duterte to stop the National Bureau of Investigation (NBI) from participating in the investigation on the murder of her husband.

Because of loss of confidence, Choi Kyungjin, wife of slain South Korean businessman Jee Ick-joo, urged President Rodrigo Duterte to stop the National Bureau of Investigation (NBI) from participating in the investigation of the murder of her husband.

“I do not trust the NBI to carry out an impartial investigation,” Choi said in her Feb. 3, 2017 letter.

READ: Wife of slain Korean: What did we do to deserve this?

Choi wanted to exclude the NBI from the investigation following information from Atty. Rafael Dumlao that there were members of the NBI involved in the abduction and murder of her husband.

She said she would prefer that the Philippine National Police’s Anti-Kidnapping Group (PNP-AKG) be the sole agency to handle the investigation instead of a joint PNP-NBI probe.

“With the news that several high-ranking NBI personnel might also be involved… I am afraid that this will only further delay the speedy resolution you promised,” Choi said.

“Please Mr. President, while I appreciate the attention you have given to this case, I hope that it will really be resolved at the soonest possible time to allow us the closure we desperately need. I believe this can happen if the AKG will take over the investigation until its final resolution,”

Four officials of the NBI have been relieved of their post following the statement from Dumlao.

Dumlao has been identified as the brains behind Jee’s abduction and killing based on testimonies of fellow police officer Senior Police Officer 4 Roy Villegas and NBI striker Jerry Omlang. RAM/rga