Trillanes repeats claim Duterte had over P2B in bank accounts 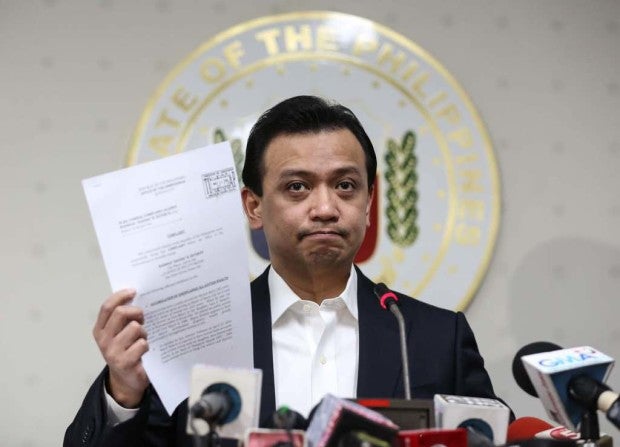 Senator Antonio Trillanes IV revived on Thursday his allegation that President Rodrigo Duterte owned more than P2 billion in bank accounts as he reiterated his promise to resign from the Senate if proven wrong.

Trillanes noted that it has been months since he first exposed Duterte’s bank accounts during the campaign period but until now, the President has yet to accept his challenge to the media to disprove his allegation.

Napoles has been charged with plunder and detained  for being the alleged mastermind of the “pork barrel” scam.

Trillanes expressed doubts, however, that Duterte would accept his challenge as this would only expose that the President was a “corrupt official.”

The senator then gave the media documents that would allegedly show Duterte’s and his family’s bank transactions from as early as 2003 to 2016.

Aside from Duterte’s bank accounts, Trillanes said they were also looking at the President’s other alleged “illegal activities” when the latter was still mayor of Davao City.

The senator said he might expose these illegal activities within the next few weeks. RAM/rga