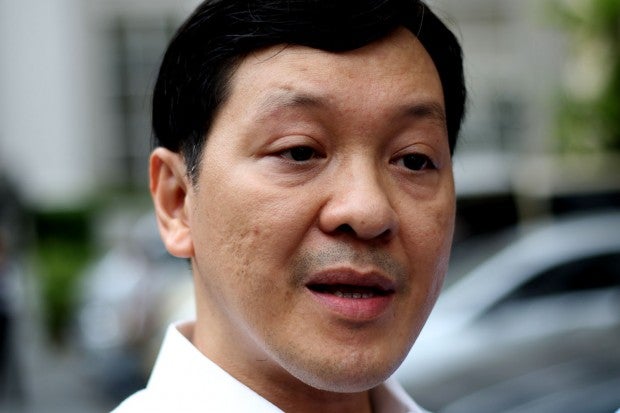 The Sandiganbayan has given the green light to put on trial dismissed Metro Rail Transit (MRT-3) general manager Al Vitangcol III for graft over an alleged extortion try on Czech firm Inekon in exchange for contracts with the railway system.

This as the anti-graft court Sixth Division in a resolution denied Vitangcol’s motion to quash his graft charges.

In its resolution promulgated Feb. 9, the court said it won’t sustain Vitangcol’s claim that he could not be charged with attempted extortion under the information filed against him because there is no such offense as frustrated or attempted extortion.

The court said what Vitangcol was charged for was actually violations of Section 3(b) of Republic Act 3019 or the Anti-Graft and Corrupt Practices Act for “demanding or requesting or attempting to extort money.”

“It is not for ‘attempted extortion’ as indeed there may be no such defined and/or distinct offense or crime,” the court said.

The court said the mere act of a public officer conspiring with another to demand or request money is violative of Section 3(b) of the anti-graft law.

“(T)he prosecution needs only to prove such request or demand to sustain the corresponding conviction,” the court said.

“Thus, if proven, such mere demand, request or attempt to extort is or shall already be a consummated offense under Section 3(b) of the Republic Act 3019. Of course, the guilt or innocence of the accused is subject to the evidence to be adduced during the trial of these cases,” the court added.

The court earlier ordered Vitangcol’s arrest after it found probable cause to try him for graft. Vitangcol has posted bail.

READ: Arrest warrant out vs Vitangcol over $30M extort try

The court on Nov. 29 served the arrest warrant against Vitangcol and his alleged envoy Wilson De Vera.

Both were formally charged with two counts of graft or violations of Section 3(b) of the Anti-Graft and Corrupt Practices Act.

In indicting Vitangcol, the Ombudsman said Vitangcol’s first graft charge stemmed from allegations that he attempted to extort $30 million from Inekon in exchange for contracts for the supply for additional light rail vehicles and maintenance of the MRT-3 in connection with the P3.7-billion MRT-3 expansion project in 2012.

Vitangcol and De Vera were accused of extorting $30 million from Inekon Group CEO and chair Josef Husek in the residence of then Czech Ambassador to the Philippines Josef Rychtar in exchange for granting Inekon the P3.7-billion contract to supply 48 coaches for the MRT 3 expansion. Inekon turned down the extort try.

After weighing in on the testimonies by Rychtar and Husek, as well as the conflicting statements by Vitangcol and De Vera, Ombudsman Conchita Carpio-Morales said the “totality of circumstances, taken together with the affirmative declarations of complainant’s witnesses” would show that Vitangcol attempted to extort Inekon in exchange for the contract.

The Ombudsman also found Vitangcol guilty of the administrative offenses of grave misconduct, serious dishonesty and unlawful solicitation, and was ordered dismissed from service and perpetually barred from government with his retirement benefits forfeited.

Due to Vitangcol’s separation from the service, the penalty of dismissal is convertible into a fine equivalent to respondent’s one year salary.

In his affidavit submitted to the House of Representatives which investigated the alleged extort try, Husek said he and Rychtar met De Vera in July 2012 when De Vera proposed that Inekon pay $30 million for the company to be selected as the supplier of MRT coaches.

The maintenance contract was later awarded without public bidding to PH Trams-CB&T, a graft-ridden contract which earned Vitangcol his first graft case.

Vitangcol’s first graft case before the Sandiganbayan was for allegedly irregularly awarding without public bidding the MRT-3 maintenance contract to PH Trams-CB&T joint venture where his uncle-in-law Arturo Soriano is an incorporator.

Vitangcol had decried selective justice, adding that the Ombudsman cleared former transportation secretary Jun Abaya even though it was him who approved the anomalous contract with PH Trams.

Vitangcol was sacked by the Department of Transportation and Communications in Aug. 2014 after he was accused of conflict of interest when he awarded a contract to the firm of his wife’s uncle. RAM