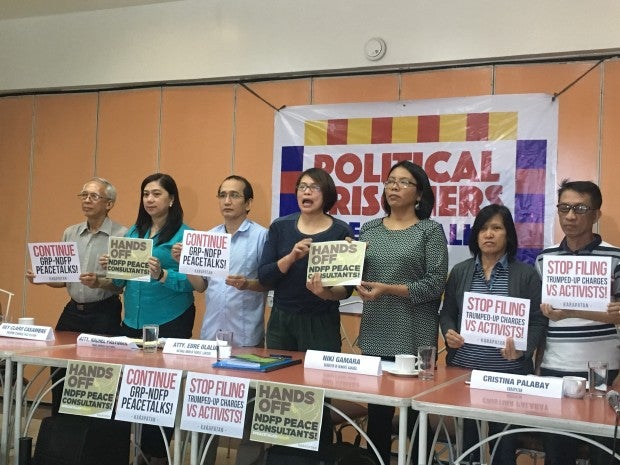 The National Democratic Front of the Philippines (NDFP) has expressed optimism that the Duterte administration would return to the negotiating table despite the President’s termination of peace talks with communist rebels.

In a media briefing, NDFP legal consultant Rachel Pastores said she was hoping that the government will reconsider its decision amid what she called as “major achievements” agreed upon by both parties in the first three rounds of talks.

“I would say that the peace negotiations were moving forward based on the substantive agenda. Both parties were really cooperating in order to come up with agreements. Major agreements have already been forged,” Pastores told members of the media.

(The discussion has just begun gaining ground and ways are being looked into to expedite it, it is unfortunate that it was terminated… On our part, there is a need to resume the peace negotiations.)

Among these major achievements, Pastores said, was the agreement of both parties on the nature of the Philippine agrarian problem and the principle of free land distribution to farmers.

“That was how serious both parties are and it was manifested on the kind of drafts they submitted,” Pastores said.

“This most significant historical achievement stands to benefit the Filipino peasant majority. It would be regrettable if the gains reached would be set aside by those in government and the ruling elites who are trying to derail the peace process,” she added.

Pastores said the NDFP will still pursue consultations on the proposed Comprehensive Agreement on Social and Economic Reforms (CASER) despite the stalled peace talks, noting the importance of continuing with its negotiations to address the root causes of the armed conflict, including poverty.

“CASER is about developing the national economy through agrarian reform and rural development, national industrialization and environmental protection, upholding people’s rights and advancing economic sovereignty and national patrimony. It is also about molding an independent foreign policy, which gives substance to the Duterte government’s vision of a sovereign Philippines,” she said.

Pastores said the target was to sign the CASER within the year.

While saying that the decision to terminate the talks was “illogical” in light of the gains, NDFP consultant Rey Claro Casambre said he was confident that President Duterte will reconsider his decision. “Malaki at malalim pa rin ang reservoir of trust [in the government] (The reservoir of trust in the government is still vast and deep), but we should understand that the negotiations are not all about trust,” he said.