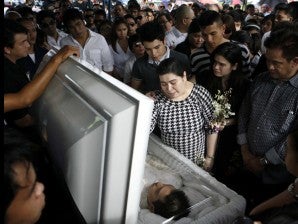 GRIEVING FOR RAMGEN Bereaved mother Genelyn Magsaysay takes a last look at his son actor Ramgen Jose Bautista (a.k.a. Ram Revilla) before he was buried in Angelus Memorial Garden in Imus, Cavite, on Wednesday, November 2, 2011. Behind the coffin, at left, is Ramgen’s brother Bacoor, Cavite, Mayor Strike Revilla. Ramgen was murdered in his home last week. PDI PHOTO BY LYN RILLON

IMUS, Philippines—Bereaved mother Genelyn Magsaysay led her children and the clan of Ramon Revilla Sr. in burying her eldest son Ramgen Jose Bautista (a.k.a Ram Revilla), 23, at the Angelus Memorial Park here on Wednesday, and strongly denied the involvement of her two other children in the murder last week.

Echoing his clan’s sentiments, Senator Ramon Revilla Jr., half-brother of Ramgen, doubted police findings that Ramgen’s brother Ramon Joseph Bautista and his sister Ma. Ramona Belen plotted and pulled off the crime. The senator, who came to the funeral with his wife, Cavite Representative Lani Mercado, called for a reinvestigation of the case.

But a Parañaque police official stood by the results of the probe, saying the city prosecutors would find probable cause against Ramgen’s siblings and at least five others.

“That’s why we are appealing, if it’s possible, to have a reinvestigation. It’s unbelievable that [the crime] could be done by our siblings,” Senator Revilla told reporters after the burial. “The family thinks (the conclusion of the investigation) is unbelievable. They (Ramon Joseph and Ma. Ramona Belen) could not have possibly done it.”

Her weary eyes shedding tears, Magsaysay was in the arms of relatives who helped her stand as she mourned the loss of Ramgen, who was shot dead inside their house in BF Homes, Parañaque, last week.

Under overcast skies, a brass band set a somber mood for over 100 teary-eyed relatives and friends. The band played tunes like “The Prayer” and “May Bukas Pa” as members of the clan wept at the white casket containing the remains of Ramgen

The music masked the wails of family members. Senator Revilla’s son, Jolo, burst into tears as the casket of his uncle was shut.

By 3 p.m., the officiating minister said prayers and Senator Revilla signaled to have the casket closed and lowered to the ground. The remains of Ramgen were buried next to the Bautista mausoleum.

The actor was killed inside his bedroom shortly before Friday midnight. His girlfriend, Janelle Manahan, who was with him at the time, survived the attack but remains in critical condition at the Asian Hospital in Muntinlupa City.

A family member placed inside the casket a box of what looked like a Johnny Walker Black Label Scotch before it was shut.

Earlier, Magsaysay expressed her dismay over charges that her other son Ramon Joseph (RJ), 18, and daughter Ma. Ramona Belen, 22, plotted the murder, insisting that she raised all her children well.

She said that while they had their differences at the time, like all other families, her children did not have the “capacity to kill their sibling.”

Both RJ and Ma. Ramona were included in the charge sheet the police filed before the Parañaque Prosecutor’s Office on Tuesday. RJ was arrested on Tuesday, while Ma. Ramona has not surfaced since attending the wake of her brother. While the Revilla clan said Ma. Ramona was not missing and would surface if charges were filed against her, police consider her to be at large.

Two men whom witnesses named as the gunmen, Michael Jay Cruz Altea and Roy Francis Tolisoro, were nabbed on Monday.

Police were still looking for at least three other persons who allegedly helped in the murder.

The distraught Genalyn appealed to the police to ascertain the true “killers” of Ramgen and appealed to the public to help her prove that Ramon Joseph and Ramona did not kill their brother.

Genalyn lashed out at the killers of her son. “I don’t know who could have done this, what kind of anger they might have against us, our family,” she said.

“Please hunt down the real killers. Don’t use our family. Don’t give us the runaround,” she continued.

Chief Inspector Fergen Torred, an intelligence official of the Parañaque police, said he was not surprised at the reaction of the family and he understood them.

“They lost a loved one already and yet the persons responsible for that were among them. It’s tough for them,” he said in a phone interview.

He expressed hope that the finding of probable cause by the city prosecutors within the week would put to rest doubts over the police investigation.

Although he considered the case to be “closed” at this point, Torred said that as of Wednesday, some investigators were still sifting through the text messages of Ramgen and other evidence and testimonies.

He maintained that the arrest of Ramon Joseph was valid, contrary to the claim of the suspect’s lawyer who threatened to file administrative charges against the police in a radio interview.

“If there are questions about what we did, we welcome any administrative case and we will answer that in the proper forum,” Torred said.

He denied that the killing was about a P1 million allowance that the victim’s family received monthly from their father, former senator Ramon Revilla Sr., which Ramgen was supposed to be handling for his siblings, as revealed by sources.

He insisted that the motive into the crime was “personal” and the charges against RJ, Ma. Ramona and at least five others were based on “credible” testimonies, which investigators pieced together.

Senator Revilla Jr. guaranteed that he would let the “law take its course” but asked the police to do one thing: “Make sure you investigate properly. Make sure that what you are doing is right.”