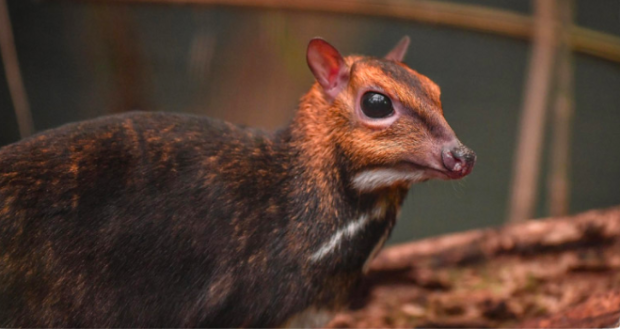 A female mouse deer was born inside the Chester Zoo in the United Kingdom. Photo from Chester Zoo’s website

One extremely rare Philippine mouse deer, which was indigenous to the southwest of Palawan, was reportedly born in captivity in Chester Zoo, Cheshire, United Kingdom.

Weighing just 430 grams, the miniature mammal is regarded as one of the smallest hoofed animals in the world. The female fawn was born to bucks Rita and Ramos, The Independent reported.

The birth also marks the first time the endangered species has been successfully bred outside the Philippines.

Due to its mere size, Chester Zoo officials described their latest addition as a “Christmas bauble on tiny legs,” and could easily be mistaken for a “child’s toy.”

Even when they reach adulthood, mouse deers stand at just 18 centimeters tall and rarely weigh more than 1 kilogram.

“The Philippine mouse deer is an endangered species,” Chester Zoo described its latest addition through their website. “It’s highly threatened by massive deforestation in South East Asia and so it’s great news that our newcomer will add valuable new bloodlines to the conservation breeding programme in zoos. It’s vitally important that we work to ensure these wonderful animals do not disappear for good.”

Despite the creature’s limitations height-wise, Chester Zoo curator of mammals Tim Rowlands lauded the birth’s huge impact towards preserving the animals’ lineage for generations to come.

“But, while this new arrival may be small in stature, it’s big in terms of importance,” Rowlands said. “It’s the very first time the animal has been bred in the UK and to break new ground like this with a mammal species is really quite rare.”

As of this writing, the Philippine mouse deer remaines listed by the International Union for the Conservation of Nature under the category of endangered species in the world, as its forest homes continually get converted into oil palm plantations.