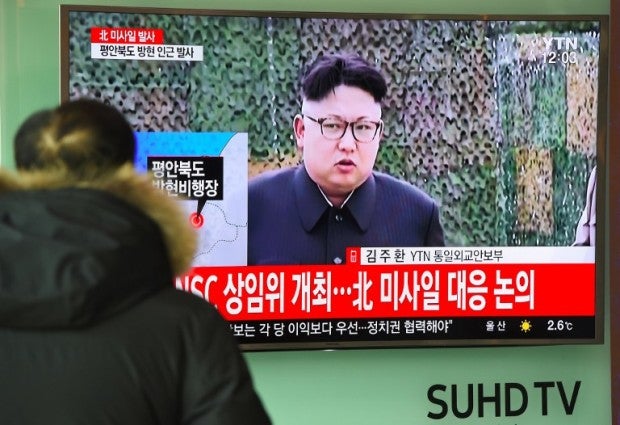 A man watches the news showing file footage of North Korean leader Kim Jong-Un at a railway station in Seoul on Feb. 12, 2017. The UN Security Council condemned North Korea’s launching of a ballistic missile on Feb. 12 in an apparent provocation to test the response from new US President Donald Trump, the South Korean defence ministry said. AFP

Council members including China, Pyongyang’s main ally, agreed on a US-drafted statement describing the test-firing of the missile as a “grave violation” of UN resolutions.

The United States, Japan and South Korea requested the urgent meeting after North Korea announced it had successfully tested a new missile on Sunday, the first launch since US President Donald Trump took office.

“We call on all members of the Security Council to use every available resource to make it clear to the North Korean regime — and its enablers — that these launches are unacceptable,” US Ambassador Nikki Haley said in a statement.

“It is time to hold North Korea accountable – not with our words, but with our actions.”

At a Washington news conference just hours before the council meeting, Trump described North Korea as a “big, big problem” and vowed: “We will deal with that very strongly.”

The latest missile — said by Pyongyang to be able to carry a nuclear warhead — flew east for about 500 kilometers (310 miles) before falling into the Sea of Japan (East Sea), South Korea’s defense ministry said.

North Korea is barred under UN resolutions from carrying out ballistic missile launches or nuclear tests.

But last year, it conducted two nuclear tests and numerous missile launches in its quest to develop a nuclear weapons system capable of hitting the US mainland.

The Security Council has imposed six sets of sanctions since Pyongyang first tested an atomic device in 2006. CBB