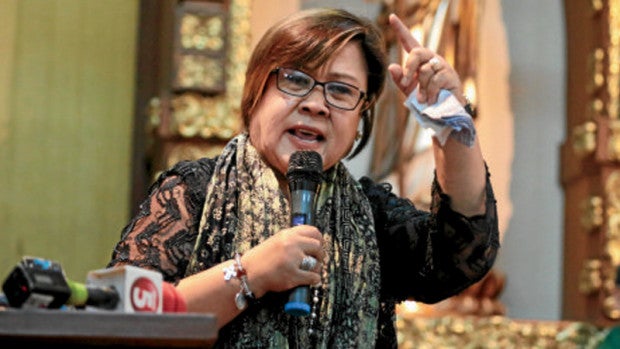 The Senate will not allow Sen. Leila de Lima to be arrested inside the session hall and will insist that the rule of law be followed, Senate President Pro Tempore Franklin Drilon said on Monday.

But Drilon, who is acting Senate President in the absence of Senate President Aquilino Pimentel III who is abroad, conceded that the Senate cannot stop the arrest of De Lima, who is facing possible drug trafficking charges before the Department of Justice (DOJ).

He acknowledged that the Senate cannot stop the arrest of De Lima outside the session hall as the alleged offense to be filed against his Liberal Party mate had a penalty of beyond six years’ imprisonment.

“That is a legal process and the general statement that I can make is that we will see to it the process is followed strictly in accordance with the rule of law,” Drilon said.

Asked whether the Senate can take custody of De Lima, he said that was up to the court to decide “because at that point, theoretically, she is under the custody of the court.”

On Monday, De Lima dared the House to investigate a Bureau of Corrections confidential memo stating that Justice Secretary Vitaliano Aguirre II restored special privileges to high profile New Bilibid Prison (NBP) inmates who testified against her in the House inquiry and who were transferred to a military custodial center in September last year.

De Lima said she had already replied to the ethics complaint filed against her in the Senate by the House and a lawyer regarding her move to stop her former bodyguard and boyfriend Ronnie Dayan from attending the House inquiry investigating her alleged involvement in the proliferation of the illegal drug trade at the NBP.

She said she only provided guidance to Dayan “because he was asking my advice or opinion if he should attend.”

As she anticipates to be charged and even arrested anytime this week, De Lima is preparing to slap charges against Aguirre before the Ombudsman.

De Lima said that among the charges she will file against Aguirre included subordination of perjury and tampering with witnesses for pressuring them against her as well as for recent controversies that she said made him unfit as justice secretary.

For his part, Aguirre took exception to De Lima’s claim that the DOJ was moving heaven and earth to send her to jail.

“As a lawyer and as a former Secretary of Justice, she should know that the DOJ does not issue warrants of arrest. Consequently, it is totally irresponsible of her to announce that the DOJ is expediting the issuance of such warrants. Senator De Lima’s motivation for saying such is beyond us,” Aguirre said.

Read Next
Amendment of law creating Peza eyed
EDITORS' PICK
Over 3 Million worth of prizes to be won at Smart Padala’s SENDali Manalo Promo!
Gear up and get ready to play with Yamaha Mio Gear
Acer starts the year off strong with the Aspire Vero National Geographic Edition
If elected VP, Sara Duterte will push for mandatory military service for all Filipinos
Senate bill seeks to penalize employers requiring employees to work during rest hours
Marcos-era elections: Not what his son signed up for
MOST READ
Jose Manalo’s son Benj pays tribute to late mother: ‘You’re a testimony of God’s love’
Vice mayor slams Vico Sotto for turning Pasig into a ‘puro palabas’ city
‘Sampal sa gobyerno:’ Drilon wants unvaxxed PAO chief barred from working
Bongbong-Sara tandem names 7 candidates in initial senatorial slate
Don't miss out on the latest news and information.