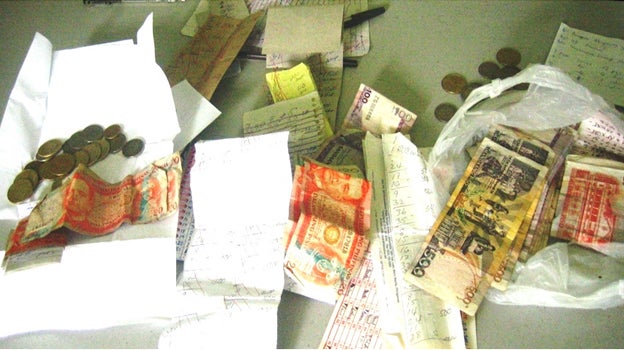 Money and gambling paraphernalia are strewn on a table following a raid by police on a jueteing joint. INQUIRER FILES

The Philippine National Police’s anti-drug campaign “Oplan Double Barrel Alpha” is taking a backseat as the police shift their focus to illegal gambling in the country.

Police in the regions will conduct “one-time-big-time” operations to make their areas of jurisdiction free of illegal gambling, said Dela Rosa.

“The Philippine National Police will continue to hit hard on all forms of illegal gambling activities in line with Executive Order No. 13 issued by President Rodrigo R Duterte,” Dela Rosa said in a prepared statement.

The EO 13 directs the PNP, the National Bureau of Investigation and other law enforcement agencies to intensify the national campaign against illegal gambling in coordination with the Department of Justice, Department of Interior and Local Government and Department of Information and Communications Technology.

The presidential order also directs law enforcement agencies concerned to “coordinate and promptly act on requests of gambling regulatory authorities to investigate and put a stop to illegal gambling activities in their respective jurisdictions,” according to Dela Rosa.

The police chief said the PNP’s Directorate for Operations was preparing a new campaign plan against illegal gambling, including illegal online gambling operations.

The Duterte administration’s war on drugs led to more than 2,500 killed in police operations, while 4,500 more killings were classified as deaths under investigation.

The PNP launched the campaign against illegal gambling as it pressed efforts to cleanse its ranks of scalawags. CBB/rga