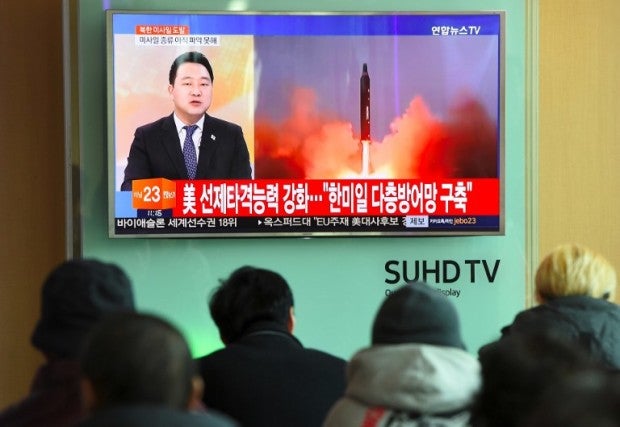 People watch the news showing file footage of North Korea’s missile launch at a railway station in Seoul on February 12, 2017.
North Korea fired a ballistic missile on February 12 in an apparent provocation to test the response from new US President Donald Trump, the South Korean defence ministry said.  AFP

SEOUL, South Korea — North Korea on Monday confirmed it had “successfully” tested a ballistic missile, in what was seen as a challenge to new US President Donald Trump.

The missile was launched from Banghyon air base in the western province of North Pyongan, and flew east towards the Sea of Japan (East Sea), South Korea’s defense ministry said Sunday.

North Korean leader Kim Jong-Un “personally guided the preparations” for the test, the KCNA report said, adding it was carried out in a way that took the “security of the neighboring countries into consideration”.

Kim “expressed great satisfaction over the possession of another powerful nuclear attack means which adds to the tremendous might of the country”, KCNA said.

“Thanks to the development of the new strategic weapon system, our People’s Army is capable of performing its strategic duties most accurately and rapidly in any space: under waters or on the land.”

Sunday’s missile launch was an apparent test of newly elected Trump, who responded to the provocation by pledging “100 percent” support of Washington’s key regional ally Japan.

The North Korean missile flew about 500 kilometers (310 miles) before falling into the sea, the South’s defense ministry said.

“Today’s missile launch… is aimed at drawing global attention to the North by boasting its nuclear and missile capabilities”, the ministry said in a statement.

“It is also believed that it was an armed provocation to test the response from the new US administration under President Trump,” it added.

It was the first such test since last October.

Japanese Prime Minister Shinzo Abe, whose country would be in range of a hostile North Korean missile launch, called the test “absolutely intolerable” during an impromptu press conference with Trump in Florida.

North Korea is barred under UN resolutions from any use of ballistic missile technology. But six sets of UN sanctions since Pyongyang’s first nuclear test in 2006 have failed to halt its drive for what it insists are defensive weapons.

Last year the country conducted two nuclear tests and numerous missile launches in its quest to develop a nuclear weapons system capable of hitting the US mainland.

South Korea’s acting president Hwang Gyo-Ahn vowed a “corresponding punishment” in response to the launch, which came on the heels of a visit to Seoul by US Defense Secretary James Mattis this month.

Mattis had warned Pyongyang that any nuclear attack would be met with an “effective and overwhelming” response. CBB