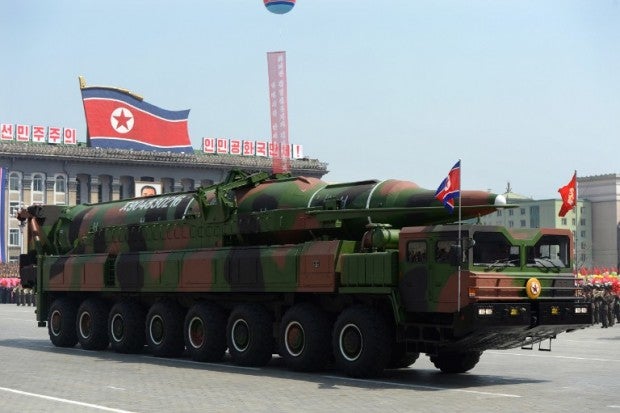 A military vehicle carries what is believed to be a Taepodong-class missile Intermediary Range Ballistic Missile (IRBM), about 20 meters long, during a military parade to mark the 100 birth of the country’s founder Kim Il-Sung in Pyongyang on April 15, 2012. The commemorations came just two days after a satellite launch timed to mark the centenary fizzled out embarrassingly when the rocket apparently exploded within minutes of blastoff and plunged into the sea. AFP

The missile, launched around 7:55 am (6:55 a.m. Sunday, Manila time) from Banghyon air base in the western province of North Pyongan Province, flew east towards the Sea of Japan (East Sea), it said.

The missile flew about 500 kilometers (310 miles) before falling into the sea, a defense ministry spokesman said, adding the exact type of missile had yet to be identified.

“It is believed that today’s missile launch … is aimed at drawing global attention to the North by boasting its nuclear and missile capabilities,” the ministry said in a statement.

“It is also believed that it was an armed provocation to test the response from the new US administration under President Trump,” it added.

Yonhap news agency said the South Korean military suspected the North might have been testing a intermediate-range Musudan missile.

On a visit to Seoul earlier this month, new US Defense Secretary James Mattis warned Pyongyang that any nuclear attack would be met with an “effective and overwhelming” response.

“Any attack on the United States or our allies will be defeated and any use of nuclear weapons would be met with a response that would be effective and overwhelming,” Mattis said.

Pyongyang in 2016 conducted two nuclear tests and numerous missile launches in its quest to develop a nuclear weapons system capable of hitting the US mainland.

In January leader Kim Jong-Un boasted that Pyongyang was in the “final stages” of developing an intercontinental ballistic missile (ICBM) in an apparent attempt to pressure the incoming US president.

Trump shot back on Twitter, saying “It won’t happen.”

“We will work together to promote our shared interests, of which we have many, in the region, including freedom from navigation and defending against the North Korean missile and nuclear threat, both of which I consider a very, very high priority,” Trump said Friday.

Washington has repeatedly vowed that it would never accept North Korea as a nuclear-armed nation.

Analysts are divided over how close Pyongyang is to realizing its full nuclear ambitions, especially as it has never successfully test-fired an ICBM.

But all agree it has made enormous strides in that direction since Kim took over after the death of his father and longtime ruler, Kim Jong-Il, in December 2011.

The young leader is planning a “prime time” nuclear weapons push this year to take advantage of a leadership transition in South Korea — where the president has been impeached — and the US, a high-ranking North Korean defector said recently.

Thae Yong-Ho, a former deputy ambassador to Britain who recently defected to Seoul, said Kim would never trade away the North’s nuclear arsenal no matter how large a financial incentive might be offered. CBB/rga