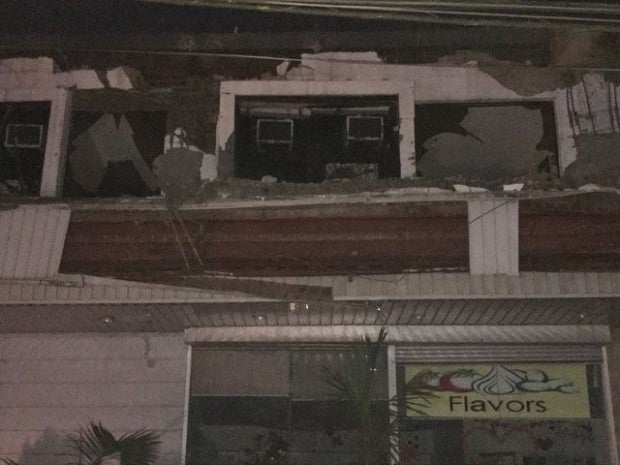 The damaged facade of the Parkway Hotel in Surigao City after a Magnitude 6.7 quake hit the city on Friday night. DANILO V. ADORADOR II

A strong earthquake of 6.5 magnitude shook some parts of Mindanao and the Visayas late Friday, injuring at least two people, damaging some buildings, knocking out power, and sending hundreds of residents fleeing to safety, officials said.

There was no threat of a tsunami from the quake in Surigao del Norte province which struck about 14 kilometers (8 miles) northwest of the capital city of Surigao at a relatively shallow depth of 11 kilometers (6.8 miles), Renato Solidum of the Philippine Institute of Seismology and Volcanology (Phivolcs) said.

The quake was set off by movement in the Philippine fault.

Many residents were roused from sleep by the shaking and rushed into the streets, with some children crying in the confusion, coast guard personnel Rayner Neil Elopre said by telephone from the coastal city of Surigao, about 700 kilometers (430 miles) southeast of Manila

“The shaking was so strong I could hardly stand,” Elopre said, adding that village leaders asked many residents to move to a school building on higher ground. He paused briefly as a mild aftershock struck as he talked on the phone.

At the offie of the Philippine Coast Guard, plates and other objects fell to the ground, he said.

Police officer Jimmy Sarael said he, his wife and two children were roused from sleep by the quake, but they could not stand as the ground shook so they embraced their son and daughter tightly until the shaking eased. “I thought our house would collapse,” he said by telephone.

They later moved to the moonlit grounds outside the provincial capitol complex, where more than 1,000 other jittery residents fled and may spend the night in the open, he said.

According to Phivolcs, Intensity 6 was felt in Surigao City, where among the buildings damaged was the Parkway Hotel.

The Philippines lies in the so-called “Ring of Fire,” a line of seismic faults surrounding the Pacific Ocean where earthquakes and volcanic activity are common –With reports from Karlos Manlupig and Danilo Adorador II, both of Inquirer Mindanao /atm 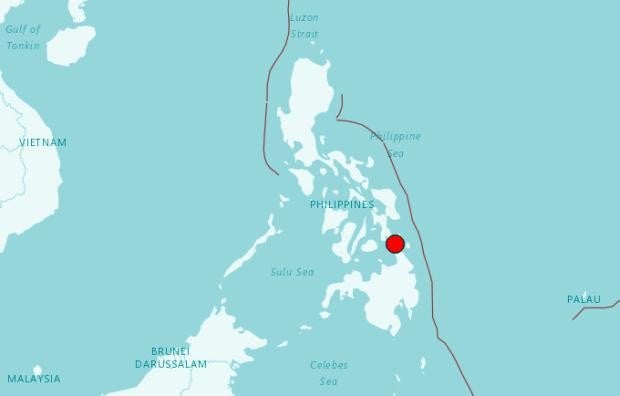 Location of a 6.5-magnitude quake that struck off Mindanao late on Friday, Feb. 10, 2017. (Image from the US Geological Survey)