Duterte ally still hopeful talks with communists will push through 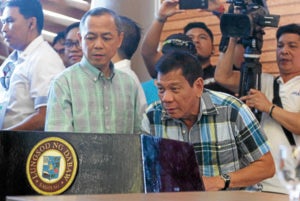 A long-time friend and former spokesman of President Rodrigo Duterte has joined calls for him to resume negotiating peace with communist rebels.

But Laviña, who served as executive secretary and peace envoy to Duterte when he was mayor of Davao City, said both sides would eventually have to return to the negotiating table.

“As a peace advocate involved in the peace process in the past… we should try hard to achieve peace,” Laviña said at the Pandesal Forum in Quezon City on Thursday. “We have to end the internal conflict, or our country will not move forward.”

“I am very hopeful,” he added. “But in the negotiation process there are twists and turns. We have to undertstand and expect this.”

He said Duterte had already released jailed NDFP leaders to participate in the peace talks. But he could not give in to the rebels’ demand to release all 400 political prisoners due to pending court cases and objections from the military.

“Hopefully the leadership of the CPC-NDF has to understand that,” he said.

Laviña said he believed the NPA lifted the unilateral ceasefire shortly after the third round of talks held in Rome because the exiled NDFP leaders were “disconnected” with the rebel combatants.

“The NPAs are the ones on the ground,” he said. “They take the brunt of military clashes, hold the guns, and have the money in collected revolutionary taxes…They are essentially now the center.”

“I think the NPA is flexing its muscle, asserting its primacy,” he went on.

He said the discussions in the peace talks being held in European cities might not have reached the ranks of rebels, in the same way that the government had not fully involved the public in the peace process.

But while NIA has stopped collecting fees, farmers’ associations who manage communal irrigation systems still collect dues from their members, he said.

NIA will lose about P2 billion a year due to the suspended collection of irrigation service fees.

Laviña said the P2 billion allocated by Congress this year would not be enough to cover the losses since the NIA originally asked for P4 billion for the operations and maintenance of irrigation systems in 2017.

He said they might still try to collect P13 billion in “back accounts” of uncollected irrigation service fees from farmers’ and farmers’ associations.

Of the 1.7 million hectares of irrigated rice lands, only 1.2 million hectares are still planted with rice. The rest have been converted to commercial or industrial use, or their irrigation systems have fallen into disrepair. /atm