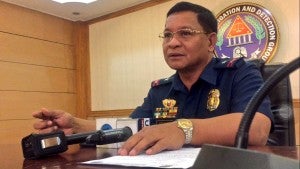 A team of police officers, supported by some soldiers, have captured an alleged senior finance officer of the Communist Party of Philippines-New People’s Army (CPP-NPA) in the Negros Island Region.

The suspect was identified as Regina Navarro, alias Regina Quilop and Ka Jhea. She was captured at around 6:45 p.m. on Tuesday in Barangay 10 in Bacolod.

Information about the arrest is contained in a report submitted by Senior Supt. Francisco Esguerra, chief of the Criminal Investigation and Detection Group (CIDG) in the Negros Island Region (Region 18), to Chief Supt. Roel Obusan, overall head of the CIDG.

Esguerra said Navarro is the deputy secretary of the regional finance bureau of CPP-NPA Negros regional committee. He added that Navarro was the subject of an arrest warrant for murder issued by the Cadiz City Regional Trial Court Branch 60.

Navarro was brought to CIDG headquarters at Camp Alfredo Montelibano Sr. in Bacolod for interrogation before being turned over to the court.

In an interview with reporters in Metro Manila, Obusan said the CIDG was already coordinating with the Bureau of Immigration and other agencies to monitor the whereabouts of consultants of CPP-NPA and its political wing, the National Democratic Front of the Philippines (NDFP), who had earlier released to participate in the peace talks with the government.

Obusan said the coordination was needed in order to comply with the rule of the law and whatever the courts would order the police.

He noted that the consultants had already been jailed while undergoing trial for various charges and were just allowed by the courts temporary freedom after posting bail in order to participate in the talks in Norway and Italy.

The rounding up of the consultants was “a normal process,” the CIDG chief said, similar to criminals ordered arrested by the courts. But he added that the rule of law must be complied with to avoid accusations of irregularities.

“Let us put it straight that these people had been issued warrants and they have been arrested,” he said. “Some already had ongoing trials so they are under the custody of the court. Their release was by virtue of the court as requested by the executive department. We will [comply] with the rule of law in all we do.”

This is why, Obusan said, that the CIDG would also be waiting for orders from the court.

“Their going to Norway and their appointment as peace panelists was because of the court, so we can apprehend them later because of court processes also,” he said.

However, even without court order, Obusan said the consultants could be arrested without a warrant if they would be caught in the act of committing a crime, not necessary rebellion, which some have been charged with.

The consultants, once they get back to the country, are expected to go to the courts that freed them and resume their detention. However, some lawyers of the CPP-NPA said the President’s termination of the joint agreement of security and immunity guarantees would only take effect after 30 days.

Obusan countered that the interpretation or application of the 30-day rule was “beyond the ambit” of CIDG’s authority, adding that the CIDG would just follow the orders of the President to round up the consultants.

“We are following it, but we expect that in doing so, it will be in accordance with the legal aspects and following the rule of law,” he said.

If the consultants fail to report to the back to the court or decide to hide to escape from being detained again, the CIDG would also have a reason to hunt for and arrest them, Obusan said.

The CIDG chief, however, refused to confirm if authorities had already located the consultants who arrived in the country, saying it was a “secret.”

“If I tell you, they might leave,” he added. “It’s common knowledge who are still in Norway and who are already here. It’s just a matter of addition and subtraction. There’s an order for us [to arrest them] so the first step is know their whereabouts.” /atm