LA to pay $1.5m to parents of black man shot by police 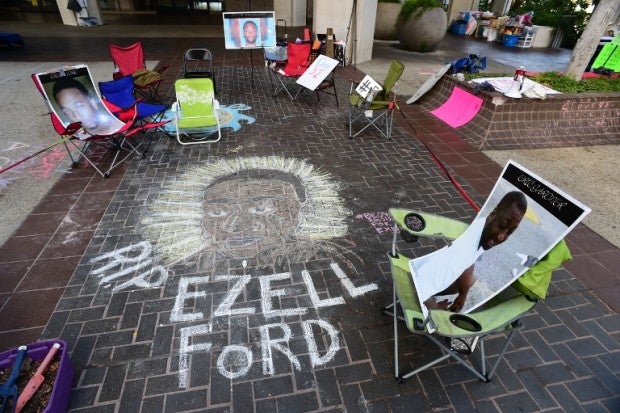 A chalk drawing of Ezell Ford, a mentally ill African-American man who was killed by Los Angeles police two years ago, is encircled by photos of other black and brown people also killed by police, at an encampment of activists associated with the Black Lives Matter movement, Aug. 12, 2016, outside of City Hall in Los Angeles, California. AFP FILE

LOS ANGELES, United States — The city of Los Angeles has agreed to pay $1.5 million to the parents of an unarmed black man whose killing three years ago became a rallying cry against police brutality.

The settlement comes just weeks after authorities decided not to press charges against the two officers involved in Ezell Ford’s killing in August 2014.

Ford, 25, whose family said he was mentally challenged, was gunned down by the two officers after they confronted him as he walked near his home in Los Angeles.

The officers said they approached Ford, who had been diagnosed with schizophrenia, because he was acting suspiciously. A scuffle ensued during which, police said, he attempted to grab one officer’s gun.

A police oversight panel in 2015 concluded that the officers violated department policy as they had shown no valid reason for stopping Ford.

The panel, known as the Los Angeles Board of Police Commissioners, said however that while one of the two officers was unjustified in opening fire, the second was right to use his weapon when he saw Ford scuffling with his partner.

The notice of settlement in the case was filed in October but the terms of the agreement were not revealed at the time.

Wednesday’s announcement comes less than two months after the Los Angeles City Council announced it had agreed to pay more than $8 million to settle lawsuits related to police shootings of three other unarmed men. CBB