With hunt for rebel leaders underway, Duterte urged to be more patient 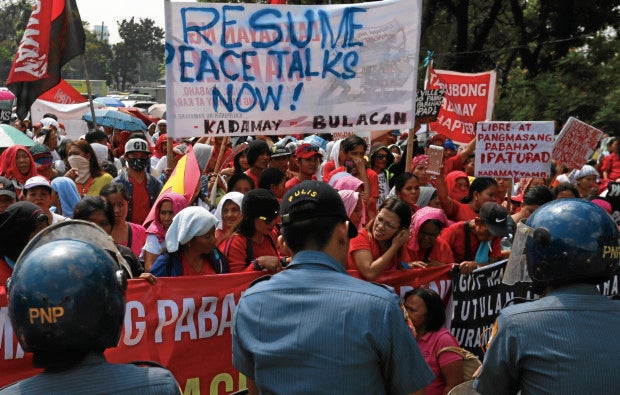 PEACE RALLY Militants demand resumption of peace talks between communist rebels and
the government in a rally along Elliptical Road near theNational Housing Authority in
Quezon City on Wednesday. —EDWIN BACASMAS

Sen. Francis Pangilinan on Wednesday called on President Rodrigo Duterte to be more patient and tolerant in working for peace as the military and police intensified the hunt for rebel leaders who took part in the peace negotiations.

Pangilinan said the President’s decision to terminate the talks with communist rebels early in his term was “rash and impulsive.”

The government on Tuesday announced an all-out war against the Communist Party of the Philippines (CPP) and the New People’s Army (NPA), after Mr. Duterte lifted the government’s ceasefire and ended talks with the National Democratic Front of the Philippines (NDFP) that had shown some promise of success at the start of his term. The rebels will end their own truce on Friday.

“This communist insurgency, which has resulted in the killing of Filipino by fellow Filipino, has been going on for nearly half a century. He has been President for just six months,” Pangilinan said.

“Giving up on peace and declaring all-out war just six months into his presidency, I believe, with due respect, is being rash and impulsive,” he said.

“We need greater patience and understanding rather than anger and the ease to resort to violence and more killings,” he added.

As the military started hunting down NPA rebels, a nationwide alliance of peace advocates added its voice to calls for the revival of the talks.

Like Pangilinan, the Citizens Alliance for Just Peace (CAJP) asked for more sobriety from the government and the rebels.

“Scuttling the peace talks would bring monumental disappointment for those striving to build a just and enduring peace in our land,” said the group, which is composed of institutions, Church groups and activists advocating for peace.

CAJP said the gains achieved in the talks were in peril and the threat of widespread violence had heightened after the declaration of war on the rebels.

Armed Forces Chief of Staff Gen. Eduardo Año said many of the NDFP consultants, including alleged CPP Chairman Benito Tiamzon and his wife, Wilma, had gone underground but they would eventually be captured.

“Do they really want to spend the rest of their lives hiding like rats?” Año said. “It’s their choice if they want to go into hiding again but the long arm of the law will always catch up with them.”

The military did not waste time and immediately launched operations against the rebels in Mindanao, even before Mr. Duterte announced he was terminating the talks.

Maj. Gen. Rafael Valencia, the commander of the 10th Infantry Division, said he had dispatched Army units to hunt down the rebels as soon as Mr. Duterte terminated the government’s unilateral ceasefire.

Valencia also said his men were now trying to locate NDFP advisers and negotiators, who had been released from detention to participate in the talks. “They should better turn themselves in,” he said. —WITH REPORTS FROM CHRISTINE O. AVENDAÑO, ALLAN NAWAL, KARLOS MANLUPIG, ELDIE AGUIRRE, CYNTHIA D. BALANA, JIGGER JERUSALEM, CARLA P. GOMEZ AND GIL CABACUNGAN