NPA on all-out war: Bring it on 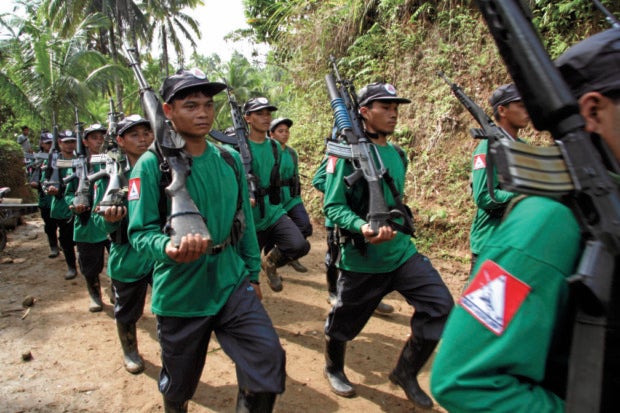 LUCENA CITY—Been there, done that.

Communist rebels on Wednesday said they had survived full-scale military offensives in the past and were confident they would overcome the “all-out war” declared by the government after talks to settle nearly 50 years of insurgency were terminated by President Duterte.

“That all-out-war order is nothing new to us. The rebel movement had already faced and successfully overcome them before,” Cleo del Mundo, spokesperson for the New People’s Army (NPA) Apolonio Mendoza Command in Quezon province, said in an online interview on Wednesday.

Del Mundo said the communist guerrillas, particularly in Quezon, had been preparing to face the renewed offensive over the past six months during a shaky truce between the government and the NPA. They had been on constant combat footing “against possible attacks by the enemies,” she said.

In a statement late on Tuesday after the government terminated the Joint Agreement on Security and Immunity Guarantees (Jasig), chief rebel negotiator Fidel Agcaoili said the administration of President Corazon Aquino was the first to declare an all-out war on the communist rebels.

“We are used to these threats,” Agcaoili said in a statement. “The revolutionary movement will persist and continue the struggle for the national and social liberation of the Filipino people to bring about a just and lasting peace in the country.”

The junking of the Jasig strips rebel negotiators and their staff of safe conduct, clearing the way for their arrest.

“We will hit them in all sides of their bases,” Quidilla said. He cited recent Army assaults on guerrilla zones in Masbate, Sorsogon, Rizal and Occidental Mindoro provinces. At least one NPA fighter was killed in the Mindoro clash.

After President Rodrigo Duterte terminated the government’s unilateral ceasefire and called off the talks, Defense Secretary Delfin Lorenzana on Tuesday announced an all-out war on the rebels through “surgical operations”—precise attacks to avoid casualties among noncombatants.

Immediately after Mr. Duterte lifted the ceasefire last Friday, Armed Forces of the Philippines Chief of Staff Gen. Eduardo Año said the military “will go after the NPA … and we will hit them hard.”

Mr. Duterte said the rebels made “impossible” demands and attacked and killed several soldiers during the truce.

The NPA’s Del Mundo said Año had once belittled the NPA forces in Quezon where he had served as commander.

Año then claimed the rebels were so few “they could all fit in one tricycle,” she said. “Now he is belittling the strength of the NPA in the entire country.”

In Mindanao, a top Army commander said on Wednesday that operations against the NPA in his area resumed immediately after the President terminated the government ceasefire.

As a result, at least seven alleged NPA guerrillas had surrendered, said Maj. Gen. Rafael Valencia, commander of the 10th Infantry Division, which covers three regions, including the Davao provinces and southern Mindanao.

Solcom’s Quidilla said the military offensives would be “within the bounds of the AFP rules of engagement, respect human rights and (international humanitarian law) at all times

—meaning there should be no collateral damage.”

“Our commander emphasized that in carrying out missions, we should not abuse our authority to maintain the trust and confidence of the AFP Commander in Chief and the Filipino people,” Quidilla said, noting that Mr. Duterte enjoys widespread support.

Cause of armed conflict

Amid talk of renewed hostilities, militant youth leaders and a legal consultant for the National Democratic Front of the Philippines (NDFP) urged Mr. Duterte to resume the talks.

The student leaders also questioned the timing of the scrapping of the talks—just as the two sides were discussing an agreement on social and economic reforms aimed at resolving economic grievances and social inequalities—the main cause of the armed conflict.

Leaders of Anakbayan, League of Filipino Students (LFS), National Union of Students of the Philippines and the College Editors Guild of the Philippines said students would hold rallies on Friday to call on the government to return to the negotiating table and denounce “saboteurs” of the talks.

Anakbayan secretary general Einstein Recedes said that Mr. Duterte seemed to have succumbed to his emotions while being egged on by the United States, the military and the elite oligarchy.

“All-out war will not address landlessness, unemployment and contractualization,” Recedes said. “Human rights violations will only increase without resolving the roots of conflict.”

“There is no fundamental change yet. You can’t just make the NPA surrender,” he added.

LFS national spokesperson JP Rosos said his group was “condemning the decision and pronouncements of the Duterte regime.”

Rosos noted that Mr. Duterte scrapped the peace talks following a US state department statement that Washington still considered the Communist Party of the Philippines and the NPA as “foreign terrorist organizations.”

NDFP legal counsel Edre Olalia said the “compelling reason” that the President wanted to see in resuming the talks was evident.

“Identifying, addressing and resolving the roots of the armed conflict—stark penury, massive injustice, widespread landlessness, maldevelopment, foreign intervention, exploitation and oppression by the few versus the many he represents—are more than compelling reason to come back to the table,” Olalia said.

The short-lived peace talks would also show that it had scored a lot of gains despite divergent views between the government and the communist rebels, he said.

Año on Wednesday said many NDFP consultants had gone underground, but he was confident that “the long arm of the law will always catch up with them.”

“We will reduce their capacity to fight,” he told reporters after he was confirmed as chief of staff by the Commission on Appointments.

Año also said that in lieu of the NDFP negotiations, the military may hold “localized peace talks” to give NPA fighters a chance to “go back to the mainstream.” —WITH REPORTS FROM VINCE F. NONATO, LEILA B. SALAVERRIA, ALLAN NAWAL, KARLOS MANLUPIG AND ELDIE AGUIRRE