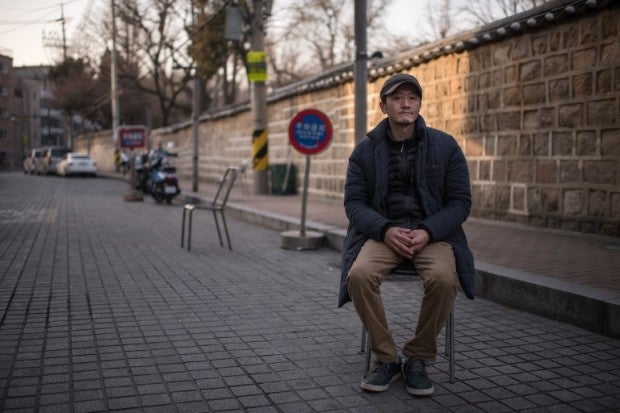 This photo taken on February 8, 2017 shows film distributor Kim Il-Kwon posing for a photo on a street outside his office in Seoul. Kim was one of thousands of artists secretly blacklisted by the conservative government for voicing “left-wing” thoughts — meaning criticism of the authorities. The government blacklist was aimed at starving artists of official subsidies and private funding and placing them under state surveillance, according to prosecutors probing the sprawling South Korean corruption and power abuse scandal that has brought millions of people onto the streets and seen President Park Geun-Hye impeached. Photo from AFP.

SEOUL, South Korea – When a documentary opened on the deep sea divers who retrieved around 300 bodies, mostly schoolchildren, from a South Korean ferry disaster, tickets sold out — but it played to half-empty cinemas.

There was no indication at the time, but “Diving Bell” — about the controversial 2014 sinking of the Sewol — was a victim of the sprawling South Korean corruption and power abuse scandal that has brought millions of people onto the streets and seen President Park Geun-Hye impeached.

The film’s distributor Kim Il-Kwon was one of thousands of artists secretly blacklisted by the conservative government for voicing “left-wing” thoughts — meaning criticism of the authorities.

“I was so surprised” by the vacant seats, he told AFP. “The movie was the talk of the town and many people had showed interest before its release.”

The explanation emerged last month, when former culture minister Cho Yoon-Sun was arrested over accusations including ordering bulk ticket purchases in a bid to prevent the public seeing “Diving Bell”.

The government blacklist was aimed at starving artists of official subsidies and private funding and placing them under state surveillance, according to prosecutors probing the wider scandal.

Its existence has sent shivers across the country’s filmmakers, who say it took a devastating toll on the freedom of expression that helped transform what was once an army-ruled backwater into a celebrated cultural powerhouse.

South Korea is now democratic but many describe the cultural landscape under Park as reminiscent of the 1961-79 reign of her own father, the late dictator Park Chung-Hee, who imposed ruthless censorship on the arts.

South Korea’s vibrant entertainment industry has since taken Asia by storm, with its TV dramas, films and stars enjoying avid followings in the past decade, and its Busan film festival hailed as Asia’s top cinematic event.

Former minister Cho and Park’s powerful ex-chief of staff Kim Ki-Choon were both indicted for abuse of power and coercion over the blacklist on Tuesday, along with two of the impeached president’s former aides.

The list of nearly 10,000 artists in film, theatre, dance, music, fine arts and literature reads like a Who’s Who of Seoul’s art scene.

They include novelist Han Kang, winner of the 2016 Man Booker International Prize, and film director Park Chan-Wook, whose “Oldboy” took the Grand Prix at Cannes in 2004.

Many had voiced support for opposition parties, or criticised Park, such as over the botched Sewol rescue efforts — and some simply expressed support for the victims’ families.

State backing for Kim’s niche distribution firm, Cinema Dal, ended after “Diving Bell”, he said, and he had had to let three of his seven staff go.

“Officials told me directly that there would be no government support once I distribute ‘Diving Bell’,” Kim said.

Some employees discovered that their phone records had been tapped by police and intelligence authorities, he added.

“I’ve been in this business for over two decades but never seen anything like this,” said Kim. “It’s truly frightening.”

The Busan International Film Festival (BIFF) — Asia’s biggest movie event — screened “Diving Bell” in 2014, and has since seen an unprecedented cut in state funding and a flurry of official probes, with the director’s contract not renewed.

Many suspect political motivations. “We have gone through so many indescribable ordeals for past two years… now we know why,” current BIFF co-director Kang Soo-Yeon said in a statement last month.

“Those in power tried to tame the culture in line with their taste… by silencing all voices they find uncomfortable.”

Among the few remaining options were “mindless romance”, he told AFP. “It was a dark age for South Korean cinema.”

Lee, 71, circumvented the restrictions with 1970s and 80s hits that contained no overt criticism but featured rebellious youngsters and were seen as a symbol of public frustration with the government.

The 1992 election of South Korea’s first president with no army background for decades opened the floodgate for uncensored films, songs and TV dramas, which he said laid the foundations for the so-called “Korean Wave” that has swept Asian pop culture today.

But that success is now under threat, according to Choi Hyun-Yong, head of the Korea Motion Picture Industry Strategy Centre.

Most Seoul movie investment firms secure some funding from the government, he explained, which has increasingly dictated which films they should back.

“It has encouraged more investments on ‘patriotic’ projects, like a film featuring soldiers fighting against the North, or that hails economic growth during the rule of Park’s father.”

He warned against the example of neighboring Beijing’s heavy censorship, which has stifled artistic creativity.

“Look at China. It is Asia’s biggest movie market but is not exactly known for its soft power or films popular beyond its own border.

Choi added: “Freedom of expression is the root of our strength as a cultural powerhouse,” he added. “We can’t let that hard-won jewel be taken away like this.”