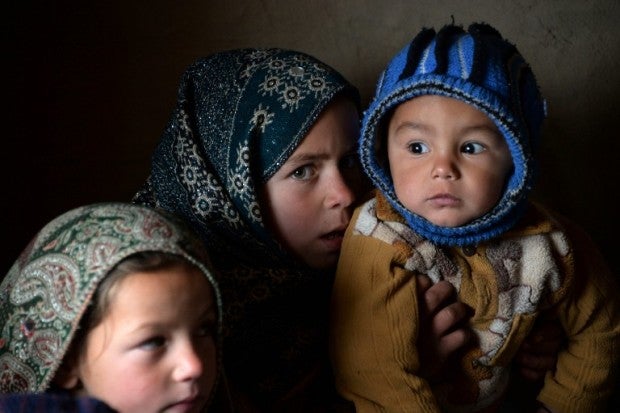 In this photograph taken on January 18, 2017, Afghan children warm themselves with a blanket inside a mud house at a refugee camp on the outskirts of Laghman. Marooned in a tent billowing in the winter wind, Gul Pari’s family is among thousands of war-displaced Afghans crammed into settlements alongside a flood of returning refugees, in a double-pronged humanitarian crisis engulfing the country. Conflict-torn Afghanistan is struggling to reabsorb large masses of refugees and failed asylum seekers being sent back from Pakistan, Europe and Iran, joining more than half a million others uprooted by war. Photo from AFP.

JALALABAD, Afghanistan – Marooned in a tent billowing in the winter wind, Gul Pari’s family is among thousands of war-displaced Afghans crammed into settlements alongside a flood of returning refugees, in a double-pronged humanitarian crisis engulfing the country.

Conflict-torn Afghanistan is struggling to reabsorb large masses of refugees and failed asylum seekers being sent back from Pakistan, Europe and Iran, joining more than half a million others uprooted by war.

“We are praying our tent does not fall down in the winter rain,” the mother-of-four said, as her children huddled around a kettle inside the fragile shelter cobbled together from rags.

Gul Pari’s family was forced to flee the badlands of Pachiragram district in Nangarhar, bordering Pakistan, where the Islamic State group has ushered in a new age of barbarity with beheadings, arson attacks, and by blowing up some enemies with explosives buried beneath them.

More horrifying, Gul Pari said, was their diktat in some areas to families with unmarried daughters or widows to raise white flags over their houses, marking the women as wives for new IS recruits.

“It is better to live in misery like this than to become a victim of Daesh,” Gul Pari said, using the Arabic acronym for IS which is common in the area.

Officials say IS is on the retreat owing to a sustained campaign of US airstrikes, but the UN has documented an alarming increase in attacks by the groups on civilians, perhaps evident in the steady number of people fleeing areas with their presence.

As violence spiked last year across Afghanistan, about 1,700 people were displaced every day from their homes, hitting a record annual figure of more than 600,000, according to the United Nations.

Hundreds of thousands of refugees separately have returned from Iran and, particularly, Pakistan, a regional nemesis cracking down on undocumented Afghan refugees. Many of them are stuck in limbo as their home districts are torn by insecurity.

In a perfect storm, the European Union last year signed an agreement with Kabul to return Afghans whose asylum appeals are rejected, which could result in tens of thousands of repatriations.

“2016 was a record year for both displacement and returns, and together these challenges are having a serious impact on the humanitarian situation in Afghanistan,” said Matt Graydon, spokesman of the International Organization for Migration (IOM).

“In addition, there is the compounded challenge of returnees becoming IDPs (internally displaced persons) because they are unable to go back to their area of origin due to fighting.”

The numbers are expected to rise this year, forcing the UN to appeal for $550 million in emergency aid, though after decades of war and the competing crisis in Syria, donor fatigue has set in.

A staggering 9.3 million people, or a third of the population, will need humanitarian assistance this year, a 13 percent increase from 2016.

The Afghan government, heavily reliant on foreign aid, has promised refugees parcels of land and cash grants, but is struggling to deliver.

The growing influx of people has sent living costs soaring and daily wages falling in many areas.

Laurence Hart, IOM’s chief in Afghanistan, told AFP there was evidence returnees were moving to unsafe provinces such as Laghman, Kunar and Kunduz in search of a more affordable refuge.

Safe options are decreasing as the government is steadily losing territory to insurgents. Only slightly more than half of the country’s districts are under government control or influence, according to US watchdog SIGAR.

As such, said Swedish ambassador to Afghanistan Anders Sjoberg, humanitarian aid is no longer a short-term solution but a “band-aid” for the unresolved conflict.

Abdul Qadir, 38, returned to his homeland with a sense of foreboding after 27 years in Pakistan.

Living in a mud-brick home on a barren desert plot near Jalalabad, with hundreds of other returnees, frequent clashes have erupted with local residents who accuse them of usurping their land.

“My children are sick from the untreated water from the village pond. There are no schools here, no hospitals, no mosques, no dignity,” Qadir told AFP.

“We went to Pakistan to flee war and we have come back to war.”