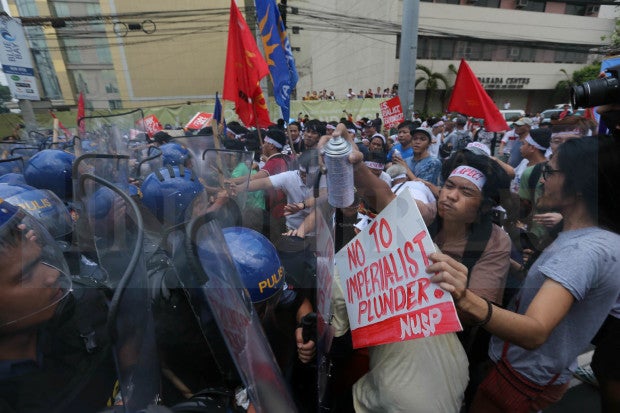 MANILA — Militant youth leaders have urged President Rodrigo Duterte to resume negotiations with the National Democratic Front of the Philippines, questioning the timing of the peace process’ failure now that the socioeconomic roots of armed conflict are being tackled.

When Duterte scrapped the peace talks out of frustration with the communists’ demands, negotiators were discussing the Comprehensive Agreement on Social and Economic Reforms, a vital document aimed at resolving economic grievances and societal inequalities in the country.

To express their dismay with the cancellation of the peace talks, from Anakbayan, the League of Filipino Students, the National Union of Students of the Philippines, and the College Editors Guild of the Philippines have announced that student groups will launch protest actions and walkouts on Feb. 10 and 23.

Anakbayan National Secretary-General Einstein Recedes said in a briefing that Duterte seemed to have succumbed to his emotions, all the while being egged on by the United States, the military, and the elite oligarchy.

“All-out war will not address landlessness, unemployment, and contractualization,” Recedes said, adding that “human rights violations will only increase without resolving the roots of conflict.”

Recedes appealed to Duterte not to “listen to the saboteurs,” saying the President had been “too irritable and sensitive.”

“There is no fundamental change yet. You can’t just make the NPA (New People’s Army) surrender,” he said.

LFS national spokesperson JP Rosos said his group “is condemning the decision and pronouncements of the Duterte regime.”

Elaborating on the purported US connection, Rosos noted that Duterte’s move to scrap the peace talks came the day after the State Department said it still considered the Communist Party of the Philippines and armed wing New People’s Army to be a “foreign terrorist organization.”

Rosos called this an “attempt to prevent the resolution of the ongoing revolution by America and the ruling class” in order to continue “plundering the riches of the Philippines and profit off the Filipino people.”

“They want our country to be a garrison state and we are heading towards that,” Recedes said, adding that students and parents should be worried about the Armed Forces of the Philippines’ “vast record of human rights violations.”

He said that the program would be aimed at indoctrination and the promotion of fascism, and not discipline and nationalism as claimed by proponents. He added that students would be subject to violence and brainwashing.

He also pointed to several incidents of violence against ROTC cadets, such as the 2001 murder of Mark Chua, a cadet from the University of Santo Tomas who exposed irregularities in the program. Chua’s death prompted the removal of the ROTC program’s mandatory status.  SFM