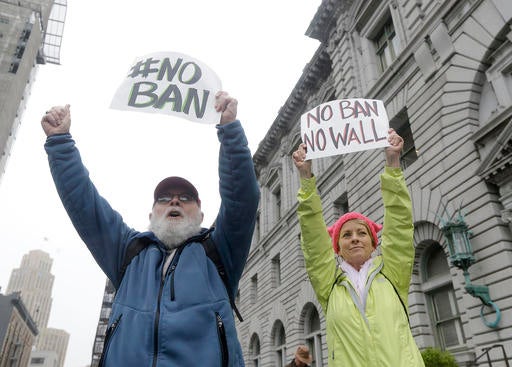 David Pearce, left, and his daughter Crissy Pearce hold signs outside of the 9th U.S. Circuit Court of Appeals in San Francisco, Tuesday, Feb. 7, 2017. President Donald Trump’s travel ban faced its biggest legal test yet Tuesday as a panel of federal judges prepared to hear arguments from the administration and its opponents about two fundamentally divergent views of the executive branch and the court system. (AP Photo/Jeff Chiu)

In a formal complaint filed Monday to the Department of Homeland Security, the groups accused customs and border officials of holding people for hours without food at airports and denying them access to lawyers following the January 27 decree blocking all refugees and immigrants from seven mainly-Muslim countries.

The Kathryn O. Greenberg Immigration Justice Clinic and the Center for Constitutional Rights detailed 28 cases, many in which people holding legal visas were required to sign forms accepting their loss of visa and deportation without being allowed to first contact attorneys.

Some did not know what they were signing, but were threatened with a five-year visa ban if they did not agree, the complaint said.

The two groups called what happened “systemic abuses and violations” of the immigrants’ rights, saying it was a pattern repeated in international airports around the country after the controversial order was signed.

The complaint, filed to the Homeland Security Department’s Inspector General, said some people were held more than 30 hours having no idea when or how they would be released.

“Lawyers representing these individuals rushed to airports around the nation, but were categorically prohibited from communicating with the individuals detained inside, even when they presented proof of preexisting attorney-client relationships,” it said.

In a Congressional hearing on Tuesday, Homeland Security Secretary John Kelly denied Customs and Border Patrol officers had acted inappropriately, even as he admitted that there had been significant confusion after the presidential order was issued with little preparation.

“Everyone was treated humanely. I’ve read the reports about people standing up for hours on end. Didn’t happen,” Kelly said.