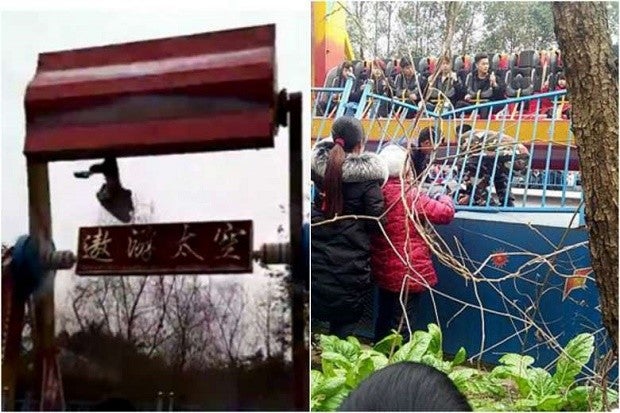 The girl is seen dangling from the ride by a leg for several seconds before she is thrown to the ground. PHOTO: SCREENGRABS FROM VIDEO/STRAITS TIMES

CHONGQING, China – The family of the 14-year-old girl who was killed after she was thrown off a swing ride at an amusement park will be compensated, the authorities said a day after the tragic Feb 3 accident.

The authorities said the girl’s death was caused by a seatbelt on the ride that suddenly broke. The ride had passed an annual quality inspection just two months ago, CGTN reported.

Park officers, however, were found to be operating the amusement rides in an improper manner.

Gan Tian and her nine-year-old cousin had successfully bought tickets for A Journey In Space ride, despite regulations stating that children under 12 years old and below 120cm are not allowed on it.

Gan Tian was flung from her seat soon after the ride started. She reportedly attempted to seize the handrail, but was thrown from the ride and her body smashed into some railings before hitting the ground.

Footage taken by an onlooker showed Gan Tian dangling from the ride by a limb for a few seconds.

A Journey In Space ride is also available in 18 other amusement parks across China. All of them have suspended operations indefinitely as investigations are underway.