President Duterte challenged 228 erring policemen to a gun duel as he showered them with insults and expletives when they were presented to him in Malacañang on Tuesday.

The searing midafternoon heat was no match for Mr. Duterte’s profanity-laden outburst, which was shown live on national television and various social media platforms.

It was his strongest condemnation yet of irregularities in the Philippine National Police, which came to the fore with the kidnap-slaying of South Korean executive Jee Ick-joo right inside Camp Crame, the PNP headquarters.

“Are you angry at me? Wait until I finish my term as President. Let’s have a gunfight. Leche kayo,” a fuming Mr. Duterte told the policemen.

“I will not think twice. You will be the next victims of extrajudicial killings. That’s true,” he warned them in a 13-minute dressing-down.

With their heads bowed, the policemen, some of whom have bulging stomach, silently stood in squad formation while their Commander in Chief was berating them in front of reporters in a shame campaign employed by embattled PNP Director General Ronald dela Rosa.

“Don’t dare me to a gunfight (because) I will not back down, you sons of bitches,” Mr. Duterte said in a raised voice. “Wait for me. Six years from now we will see each other again. As I have said, I’m not a weak leader chosen by the rich in Metro Manila. I was voted by the people.”

Dela Rosa, who was assailed by some lawmakers for using the erring policemen for a media stunt, said he presented the officers to the President as part of the efforts to weed out rogue cops from the ranks.

“As I have said, I will do anything to clean the PNP. I don’t care if they will be put to shame. If they are embarrassed, I am more embarrassed because I am the (PNP) chief. It means I’m a bad egg like my subordinates,” he told reporters.

Mr. Duterte said he actually wanted to throw the policemen into the Pasig River, but decided against it to avoid criticism from human rights advocates.

He gave them 15 days to “prepare to move out” for their eventual deployment to Basilan, Sulu and Tawi-Tawi provinces to fight the notorious Abu Sayyaf bandits or just quit the service.

“Start to move out. If you do not want to go there, go to your superior officer and tell them that you’re going to resign,” he said.

“If you leave the service, if you opt to retire, then behave. Find a clean and decent job,” he said, adding that he would create a military-led task force to monitor their movement.

The President acknowledged that most policemen were receiving meager salaries, but stressed it was not a justification for them to engage in illicit activities.

He also underscored his support for the 170,000-strong PNP force as he noted how he had assisted the local police during his term as mayor of Davao City for 23 years.

“You cannot question my support for the police. Look at Davao. There’s no abusive policeman there. There’s no checkpoint. No nothing. Why do policemen survive there? Because they have simple lives,” Mr. Duterte said.

“How about you? Imagine how many of you fool in the service! You sons of bitches! The government is just wasting the people’s money for your salaries,” he said.

“I know the culture of the police. Two out of five policemen have two wives. That’s your problem. When you are in uniform, have your gun and your badge, you act as if you’re somebody. You think highly of yourselves.”

Before leaving for a Cabinet meeting, Mr. Duterte again flared up: “You remain standing there. Wait for me because I will speak to you again later. You sons of bitches. I will throw water at you… If I see somebody relaxing, I will kick you. Try me.”

Plucked out of nowhere

The policemen were trucked to Malacañang from Camp Crame and were told they were to clear the Pasig River of water lilies blocking the President’s tugboat while commuting between his Bahay Pangarap residence and his Palace office.

Dela Rosa asked the group who among them could not swim. A few raised their hands. 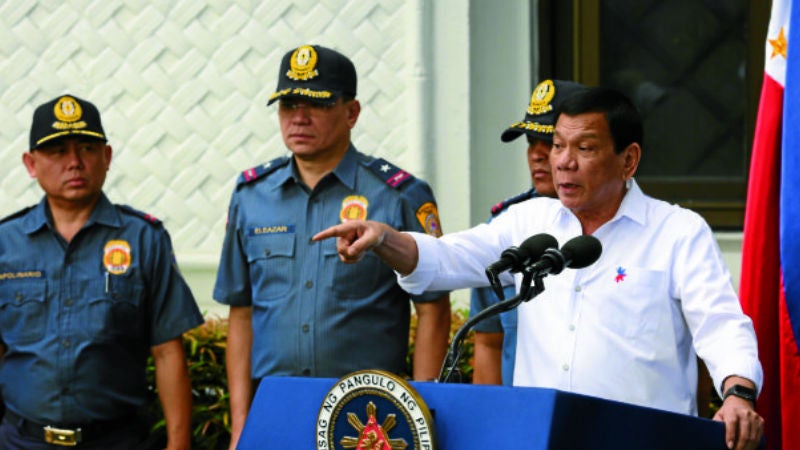 OUTBURST President Duterte tells erring policemen to return to Malacañang in swimming trunks and clean up the Pasig River.—JOAN BONDOC

“You might become my problem later on if you drown while collecting water lilies from the Pasig River,” Dela Rosa said.

The PNP chief, however, bristled when the policemen replied “None sir!” when he asked them if they were all facing criminal or administrative cases.

“They’re in denial. But look at their records,” he later told reporters.

Two of the policemen who attended the gathering told reporters that they were not under suspension or in “floating” status, adding that they were just plucked from their precincts in Metro Manila and ordered to go to Camp Crame.

One said he had no pending case, although he admitted that he and his team were accused by someone they arrested in 1998 in connection with a drug case.