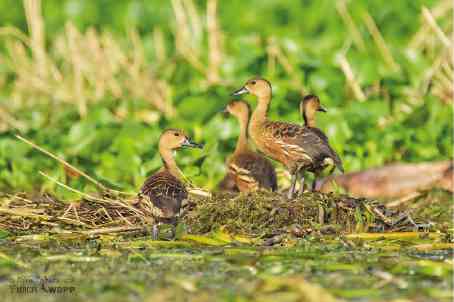 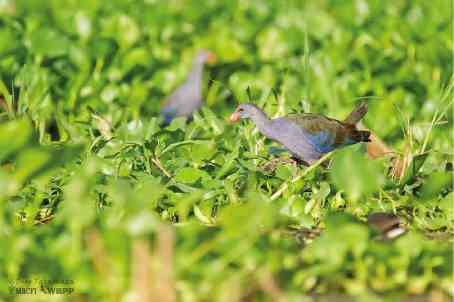 The Naujan Lake National Park in Naujan town in Oriental Mindoro province hosts different species of endemic and migratory birds like the wandering whistling duck (above) and the Philippine swamphen (below). —PHOTOS BY DON GEOFF TABARANZA/Contributor

From 10,821 birds recorded in 2016, only 6,932 from 36 species were recorded during the survey held last month by the NLNP-Asian Waterbird Census (AWC) team.

“The cause of this decline is not yet clear but it could be due to several factors, including the unfavorable weather conditions over the past weeks,” Don Geoff Tabaranza, project development and resource manager of the Mindoro Biodiversity Conservation Foundation Inc. (MBCFI), said in an email to the Inquirer.

Tabaranza said water level during the survey on Jan. 20 was high, inundating marshes and agricultural fields.

Tufted ducks (Aythya fuligula) comprised the biggest population of migratory birds in the lake, representing 70 percent of the total count during the survey, according to a report of the survey team composed. This was followed by whiskered terns (Chlidonias hybrida), at 20 percent.

The team was composed of park rangers, technical personnel of the Department of Environment and Natural Resources in Mimaropa (Mindoro, Marinduque, Romblon and Palawan) region, MBCFI biologists and volunteer students.

An evaluation by the International Union for the Conservation of Nature classifies tufted ducks and whiskered terns as being of “least concern,” due to these species’ large range and population sizes, and stable or fluctuating population trend.

The global organization Wetlands International, on its website, said thousands of volunteers across Asia and Australasia (a region of Oceania comprising Australia, New Zealand, New Guinea and neighboring islands in the Pacific Ocean) visit wetlands in their country and count water birds every January.

The AWC, it said, was initiated in 1987 in the Indian subcontinent and grew rapidly to cover Asia (from Afghanistan to Japan), Southeast Asia and Australasia.

Tabaranza urged local officials to protect the 8,125-hectare Naujan Lake through monitoring by the Bantay Lawa (lake watch) to curb illegal activities in the lake and its surrounding areas.

“We also encourage residents around the lake to practice sustainable agriculture and proper waste management to reduce pollution from agricultural and domestic wastes,” he said. —MADONNA T. VIROLA

Read Next
Gov’t declares all-out war on Reds
EDITORS' PICK
Malls adjust ‘NCR Plus’ operating hours for April 12-30 MECQ
Metro Manila to have shortened curfew hours from 8 p.m. to 5 a.m. under MECQ
Pre-order the new vivo Y20s [G] to get a free TWS earphone
Pru Life UK receives four golden arrows for solid corporate governance
‘NCR Plus’ to be under MECQ starting April 12 until April 30 — Palace
Speed up your game with the new vivo Y20s [G]
MOST READ
Stop ‘creeping occupation’ of ‘militia’ boats in WPS, Pacquiao asks China
Bea Alonzo clarifies status of her relationship with Dominic Roque
Convicted former aide of Sen. Bong Revilla dies — BuCor
Locsin to China: ‘Then move out’
Don't miss out on the latest news and information.