Bato on shaming crook cops: So what? 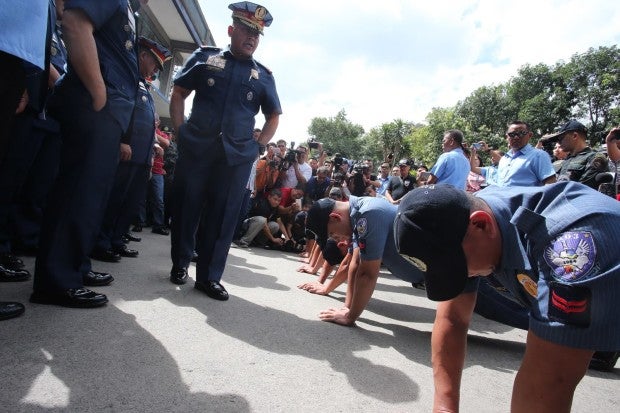 Dela Rosa drew flak for shaming rogue cops on national television, at one point making them do push-ups while shouting curses at them. Senator Francis “Chiz” Escudero said Dela Rosa was only doing it for publicity or “pang-TV lang.”

READ: Escudero chides Bato for playing to the camera

Earlier Dela Rosa brought the 228 cops to Malacañang and presented them to President Rodrigo Duterte, who in turn berated them publicly and showered them with expletives.

Duterte later said they will be sent to war-torn provinces including Basilan, Sulu and Tawi-Tawi to fight with terrorists there.

Before leaving Camp Crame for Malacañang, the police chief also berated the 228 officers, who came from different police districts in Metro Manila.

In an earlier interview, Dela Rosa hit back at his critics, saying the officers will not only do push-ups or clean Pasig River, but they will also face administrative and criminal charges.