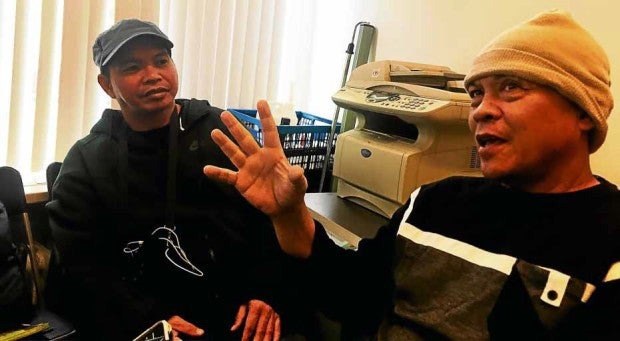 FIRST TO FALL Ariel Arbitrario (left), shown in photo chatting with a fellow peace consultant to the National Democratic Front of the Philippines, Eduardo Genelsa, at the NDFP office in Utrecht, The Netherlands, was arrested at a checkpoint in Toril District, Davao City. —KARLOS MANLUPIG

The consultants of the National Democratic Front who were temporarily released last August to join the peace negotiations cannot invoke the Joint Agreement on Safety and Immunity Guarantees (JASIG) to be immune from arrest, the military said on Tuesday.

“The agreement applies only to those who are in hiding whom the government invites to participate in the peace talks. And to encourage them to go out, we provide them ‘safe conduct passes,’” Armed Forces of the Philippines public affairs office chief Col. Edgard Arevalo said in a press briefing at Camp Aguinaldo.

The consultants were temporarily released last August only for a period of six months and on bail.

President Rodrigo Duterte ordered the arrest of the consultants over the weekend after he scrapped the peace talks between the government and communist rebels due to the collapse of the unilateral ceasefire declarations of both sides.

A consultant of the NDF was arrested in Davao City on Monday, an immediate implementation of the President’s orders.

The NDF said the consultants who were temporarily released should not be arrested yet because the government has not formally terminated the peace talks.

It cited that under the agreement of both parties, the government should send a written notice of termination that would take 30 days after the receipt of the notice.

‘Abide with the provisions of bail’

The AFP said that the consultants “should abide with provisions of bail and not of the JASIG.”

“The negotiators in question are serving prison terms or at least charged with non-bailable crime and hence they are out of prison not by virtue of ‘safe conduct of passes’ but of bail,” Arevalo said.

“With the termination of the peace talks, the ground for their temporary liberty ceases to exist,” he added.

Arevalo urged the consultants to “surrender themselves to courts” and failure to do so they “will be deemed to have jumped bail and thereupon may be validly arrested.” JE/rga