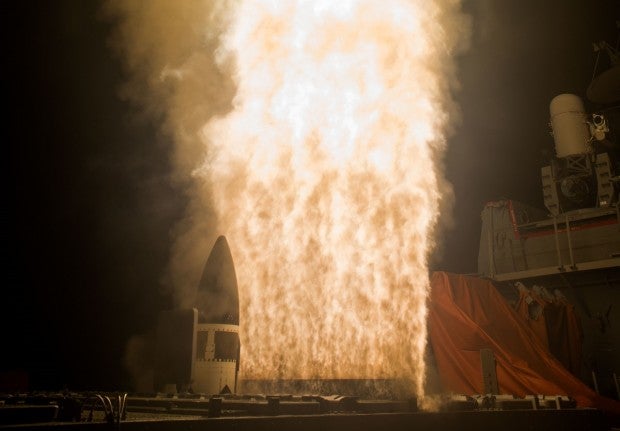 Rocket exhaust blasts through launch vents as a Standard Missile-3 Block IIA (SM-3IIA) leaves its carriage on the USS John Paul Jones (DDG 53). The U.S. Missile Defense Agency, the Japan Ministry of Defense, and the USS John Paul Jones successfully conducted a flight test Feb. 3 of the SM-3IIA that resulted in the first intercept of a ballistic missile target off the west coast of Hawaii. It was the third flight test of the SM-3 Block IIA missile, and the first intercept test. This test also marks the first time an SM-3IIA was launched from an Aegis ship and the first intercept engagement using the Aegis Baseline 9.C2 (BMD 5.1) weapon system. US MISSILE DEFENSE AGENCY PHOTO

The two nations have been working together since 2006 to develop a variant of the Standard Missile-3, a ship-launched missile that operates as part of the Aegis Ballistic Missile Defense System.

According to the MDA, America has so far spent about $2.2 billion on the system and Japan about $1 billion.

“We are both deeply concerned about North Korea’s capabilities, and we are constantly working to improve our defense capabilities,” MDA spokesman Chris Johnson said Monday.

“It makes sense for the US and Japan to share some of that burden.”

Mitsubishi and Raytheon both make parts of the missiles, which are assembled in the United States, and which are designed to defeat medium- and intermediate-range missiles.

The test occurred as Pentagon chief Jim Mattis was in East Asia on his first overseas trip as defense secretary.

He said Friday that any nuclear attack by North Korea would trigger an “effective and overwhelming” response, as he sought to reassure Asian allies rattled by President Donald Trump’s isolationist rhetoric.

South Korea is working with the United States to install another system, the Terminal High Altitude Area Defense (THAAD) system, this year to prevent against any missiles from the North. CBB