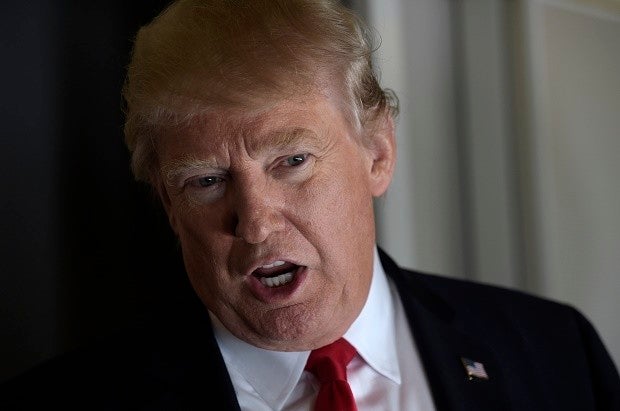 US President Donald Trump is spending the weekend at his Mar-a-Lago vacation retreat in Florida, but if his Twitter feed and a brewing legal showdown are any indication, rest and relaxation are not on the menu.

The president began his day with a Twitter storm of posts expressing his outrage at a court ruling that suspended his controversial ban on travelers from seven majority Muslim countries. By the end of the day, his administration was appealing the judge’s decision.

Here are five takeaways from Saturday’s events in Washington and Palm Beach:

On Saturday evening, the US Justice Department appealed a temporary block that had been placed on Trump’s travel ban.

The nationwide suspension of Trump’s executive order had been put in place by Judge James Robart of the federal district court in Seattle the day before.

Trump let loose a tirade of tweets Saturday morning, including a rare criticism of an individual judge by a US president.

“The opinion of this so-called judge, which essentially takes law-enforcement away from our country, is ridiculous and will be overturned!” Trump posted.

When asked at a Red Cross gala Saturday evening if he was confident the government would prevail in its appeal, Trump responded: “For the safety of the country, we’ll win.”

In light of the court decision halting the traveler ban, both the State and Homeland Security departments announced on Saturday they were resuming normal practices concerning travelers from the affected countries.

“We have reversed the provisional revocation of visas,” a State Department spokesman told AFP. The department had said some 60,000 travel visas had been revoked in compliance with the president’s executive order.

The Department of Homeland Security wrote in a separate statement: “In accordance with the judge’s ruling, DHS has suspended any and all actions implementing the affected sections of the executive order.”

From London and Paris to New York and Washington, thousands of people took to the streets Saturday in American and European cities to protest the travel ban.

The biggest demonstration by far took place in the British capital, where an estimated 10,000 people turned out, chanting “Theresa May: Shame on You” to denounce the British prime minister’s support for the new US leader.

Elsewhere in Europe, about 1,000 people demonstrated in both Paris and Berlin, while smaller gatherings of several hundred people took place in provincial British cities.

In the United States, around 3,000 people rallied in New York, hundreds marched in Washington and at least 2,000 protested near Trump’s Mar-a-Lago estate in Florida.

He needs at least 60 votes from the country’s 100 senators to prevent Democratic opponents from launching a filibuster — a procedure that essentially prevents a vote through endless debate.

“Make no mistake about it. This would be an unwise and unprecedented act,” Pence said during a speech in Philadelphia to a local chapter of the Federalist Society, a conservative group.

German news magazine Der Spiegel sparked controversy Saturday with a cover depicting Trump holding the severed head of the Statue of Liberty in one hand and a bloodied knife in the other.

The image, which shows an orange face featureless save for a wide-open mouth, was widely shared on social media and also brandished on posters at the rally in Berlin denouncing Trump’s temporary traveler ban./rga