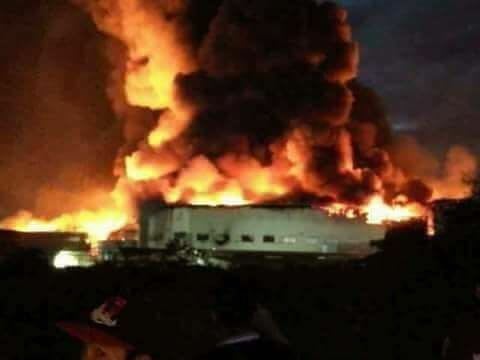 Eighty-four people were hospitalized, mostly for suffocation, in a fire that hit the factory of House Technology Industries (HTI) at the Cavite Export Processing Zone in General Trias.

Of the 84 injured (not 100 as earlier reported), 57 were taken to the Divine Grace Medical Center and the rest to the General Trias Maternity Hospital.

This injury count was updated by Senior Supt. Sergio Soriano Jr., chief of the Calabarzon office of the Bureau of Fire Protection (BFP), who was interviewed live over the telephone by radio station DZMM.

The fire was reported at around 6:19 p.m., according to Fire Officer 1 Russel Lorenzano of the BFP Cavite Provincial Office.

At around 7:50 p.m., the BFP declared the first under Task Force Charlie.

Some employees were reportedly trapped on the third floor, the fire having started at the second floor.

There were at least two explosions as the factory burned as evident in videos taken by bystanders.

As of this posting, the fire was still raging but has somewhat weakened by around 11:30 p.m., according to Soriano,

In a Twitter post, People’s Television quoted Cavite Gov. Jesus Crispin “Boying” Remulla as saying that many people were believed inside the HTI factory, which manufactures combustible materials, such as wood, Styrofoam and household products.