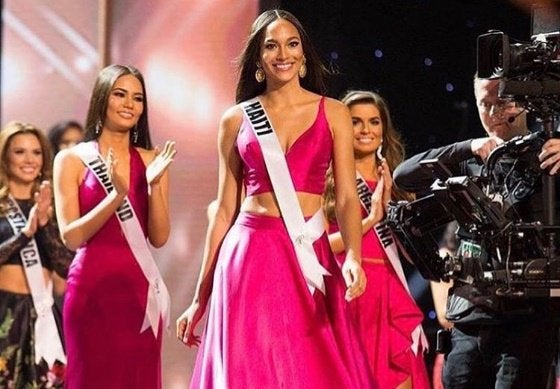 Miss Haiti Raquel Pelissier walks on the stage of the Mall of Asia Arena on Jan. 30, 2017, the coronation day of the Miss Universe 2016 pageant. Miss Haiti was eventually declared 1st runner up to Miss Universe Iris Mittenaere of France. (INQUIRER FILE PHOTO)

ILOILO CITY — Fans of the Miss Universe beauty pageant here were glued to television and radio sets and were constantly engaged in social media as the coronation was being held at the SM Mall of Asia Monday morning.

The only time Filipinos acted like this was when Manny Pacquiao had a boxing match in Las Vegas or when the Pope visited.

Many watched the coronation in homes, offices and stores, cheering when Miss Philippines Maxine Medina managed to enter the list of 13 semi-finalists.

In beauty salons, beauticians, their staff and their clients avidly waited for the short-listing of the candidates from 13 to the final three.

Pedicab drivers and vendors in markets also kept tabs of the program through live broadcasts of radio stations.

“I wasn’t able to listen to the whole contest but I wanted Miss Philippines to win. But it’s good that it was held in our country,” said pedicab driver Ranel Leyisa in Iloilo.

In the capital town of Kalibo in Aklan, work temporarily stopped at the La Herminia Piña Weaving Industry as staff and weavers watched the contest.

“Its just once a year and we’re the host,” said Phats Tambong, manager and designer of the shop.

Tambong said he was rooting for Medina but also favored candidates of Brazil and Venezuela who did not reach the final round.

Among the finalists, Tambong was expecting Miss Haiti to win and was surprised she ended the runner-up.  SFM