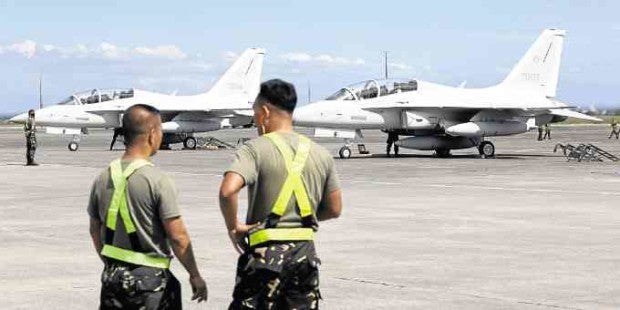 There were reports of casualties on the side of the Maute group and the Abu Sayyaf, led by Basilan-based Isnilon Hapilon, during bombing operations in their encampment areas, military officials said.

However, the actual body count had yet to be determined as ground troops were still inching toward the area that the two FA-50 jets had targeted on Jan. 26. The aircraft were part of the assets of the 7th Tactical Fighter Squadron of the Philippine Air Force.

“We will await the validated details of the results of this operation as soon as we get confirmation from our troops on the ground,” said Col. Edgard Arevalo, the military spokesperson.

Maj. Gen. Carlito Galvez Jr., the commander of the military’s Western Mindanao Command (Westmincom), described the bomb run by the jet fighters as a “surgical operation,” meaning the targets were specific.

He said soldiers from the Army’s 103rd Infantry Brigade were “cautiously advancing to their designated objectives—the location of [Abu Sayyaf] leader Isnilon Hapilon, his select group, and the brothers Abdullah, Omar and Otto Maute, and possibly other foreigners joining their notorious group.”

“We will relentlessly pursue these lawless groups. We will not allow them to thrive in any part of our country to sow terror to our people. Your Armed Forces of the Philippines—through the support of our people and local government as shown in this case—will frustrate every attempt to disrupt our normal lives,” Galvez said in a statement.

Lorenzana earlier confirmed that Hapilon, now considered the head of IS in the Philippines, had moved to Central Mindanao in a bid to unify extremist groups such as the Maute and the Bangsamoro Islamic Freedom Fighters.

“[Hapilon] moved to Central Mindanao, allegedly on the behest of the IS people in the Middle East, to find out if Central Mindanao is more conducive to the establishment of an organization because, according to the report, Basilan and Jolo are too small. They would be easily cornered there so they are looking for a bigger area,” Lorenzana told reporters in Manila on Thursday.

Hapilon, who is on the US Department of Justice list of most-wanted terrorists worldwide with up to $5 million bounty for his capture, moved to Butig from his stronghold on southern Basilan island a month ago to look for a base for his new militant alliance, Armed Forces Chief of Staff Gen. Eduardo Año told AP.

“This is Hapilon’s group,” he said.

Galvez said American troops stationed at the Westmincom headquarters here have been helping the military in so far as sharing intelligence and other tasks.

“They help in analysis of data, do some assessments and confirmation, but they are not going down [there],” he said.

“There are no US troops in Butig, walang US forces dyan. We have a number of US troops inside Western Mindanao Command, they are deployed here and confined inside. They are not allowed to leave the camp,” he told the Inquirer by telephone.

“We have dedicated people on the ground and this effort is supported by local governments and other peace-inclined groups,” he added.

He said ground troops, on Friday, were moving toward the area where armed groups were believed to have camped prior to the air raid.