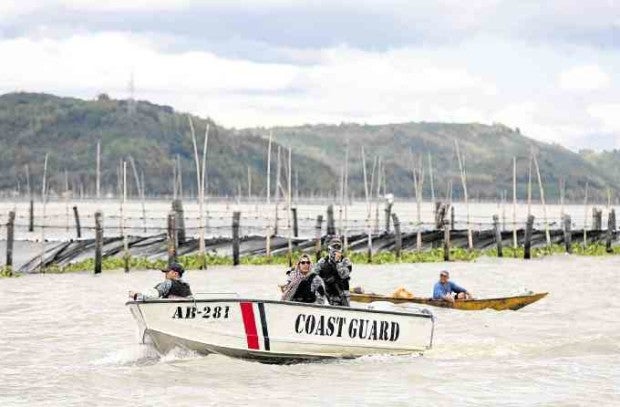 Soldiers patrol Laguna de Bay as government personnel start demolishing fish pens and other structures in a section of the lake in Cardona town in Rizal province. —LYN RILLON

Operators of commercial fish pens in Laguna de Bay warned of severe impact on the economy and food security should the government pursue its policy to wipe out freshwater aquaculture in this body of water surrounded by the provinces of Laguna and Rizal and Metro Manila.

“Surely the consequences of the abrupt stop in operations will outweigh the supposed perceived problems and cause more severe economic, social and food security issues,” members of the Federation of Fish Pen and Fish Cage Operators in the Laguna de Bay said in a letter to the Laguna Lake Development Authority (LLDA).

The federation, composed of over 100 fish pen operators, said the government, instead of dismantling fish pens, must properly implement lake zoning to make sure that aquaculture stays within the identified fishing zones.

The Department of Environment and Natural Resources (DENR) and the LLDA this week resumed the dismantling of illegal and abandoned fishing structures, since the agencies announced a “temporary moratorium” on fish pen operations.

On Jan. 12, the LLDA, through a letter, asked fish pen owners to begin demolishing their structures.

The LLDA also asked them to submit data of their current volume of fish stock, the target harvest date and a time table for “self-demolition.” Failure to do so would mean that the pens would be considered “nonoperational and/or illegal,” the LLDA said.

“The big ones (fish pens) should go,” said Undersecretary Arturo Valdez, head of the National Anti-Environmental Crime Task Force of the DENR.

In a telephone interview, Valdez said the government needs to beef up its mechanisms in dismantling the fish pens noting that the current system is “slow.”

“The letter issued [by the LLDA] was considerably troubling since it lacks legal justification under existing and relevant laws, rules and regulations or even a valid and binding board resolution. Also the rudiments of due process did not justify the contents of the letter,” the operators said in a Jan. 23 letter signed by their legal counsel, David Buenaventura and Ang Law Offices.

They said the aquaculture industry in Laguna de Bay has served as “lifeblood” of the fish supply in Luzon and has created livelihood opportunities for smaller fisherfolk.

“Nonetheless, the supposed ‘solutions’ [of the LLDA] do not show any direct, positive and actual indication that these will actually address the problems… There has also been no actual and relevant study declaring that the adverse ecological disturbances had been caused by the freshwater fishing industry,” the operators said.

Mel Felix, a fish pen operator, said President Duterte’s order was to “reduce” the number of fish pens, “not a zero-fish pen policy.”

The operators offered to help the government protect the lake from environmental degradation.

They also expressed willingness to help revitalize cottage industries around the lake, create fish sanctuaries, and provide funds for an annual seeding of one million fingerlings to benefit small fishermen.