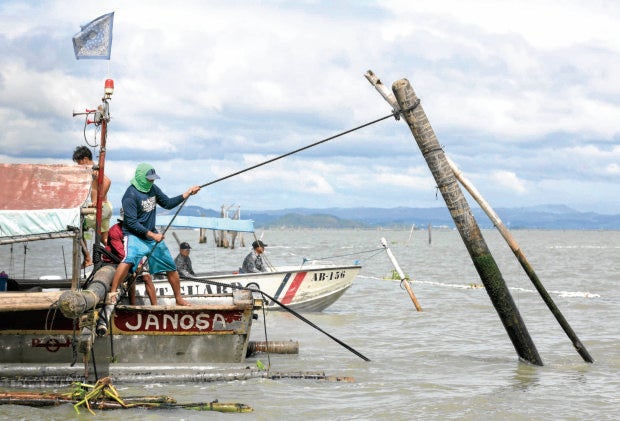 Anahaw logs and bamboo poles being pulled out of the water with ropes during the demolition of fishpen/fishcages in Laguna de Bay in Cardona, Rizal by DENR and LLDA team with assistance from Philippine Coast Guard and NBI.
INQUIRER PHOTO/LYN RILLON

After issuing a final warning to all fish pen operators last month, the Department of Environment and Natural Resources (DENR) began dismantling fish pens and fish cages in Laguna de Bay on Thursday.

“All the 90,000 hectares of Laguna Lake will be accounted for,” Environment Secretary Gina Lopez said.

She posted on Facebook a short video of two boat crew members toppling a wooden post of a fish pen.

This is “how fish pens are dismantled—very laborious!” Lopez said.

She said even the lake’s navigational highways had been blocked by illegal fish pens.

“You can already see the small fishermen going back to the lake to fish, just like in the old days. (This is) how (the lake) should be—for the people and not for big corporations who don’t even give back to the people,” Lopez added.

Valdez said the objective was to clear the lake of all illegal structures before President Rodrigo Duterte’s second address to a joint session of Congress in July.

In his first address to Congress last year, Mr. Duterte ordered the dismantling of big fish pens and fish cages in Laguna de Bay to allow small fishermen to gain access to their traditional fishing grounds.

Valdez said all fish pens in the lake were considered illegal, as the LLDA did not renew their permits after these expired last Dec. 31.

In a statement, the DENR said it would “zero in today on large, illegal fish operators that have benefited and profited from the lake region since the  ’70s.”

“Operators have been given enough time to dismantle their own pens last year and as of January this year, all permits to operate have been canceled,” it added.

Earlier, Lopez assured small-scale fishermen that they would not be adversely affected by the clearing operations.

Valdez said earlier that the DENR would not touch the baklad or fish traps owned and operated by fishermen.

He said the “only way” to save the heavily polluted lake and give access to small fishermen was to dismantle all illegal structures there.

Cmdr. Armand Balilo, spokesperson for the Coast Guard, said 150 coast guards and 18 vessels were deployed to help in the clearing operation.

“The plan is to conduct dismantling almost daily until June. We are committed to carry out the President’s order,” he said.

According to the LLDA, the structures belonged to two corporations—Christina Fishing Corp. and East West Fishing Corp., both owned by Alex Gozon.

LLDA information officer Maureen Tolentino said Gozon previously requested, and was allowed, to move his structures to a section of the lake in Muntinlupa City, but failed to do so, making the structures “illegal.”

Valdez said Gozon was aware of the demolition.

Once the underwater fish nets are removed, small fishermen began fishing in the area, making a “powerful image of small fishermen taking back [the Laguna de Bay],” he said.

Last month, the LLDA imposed a “temporary moratorium” on the operation of fish pens and fish cages on the lake.

A fish-pen operator who requested anonymity said the operators received on Jan. 12 a letter of instruction signed by former LLDA General Manager Nereus Acosta telling them to demolish their structures by themselves.

“Why should we demolish if there is no written order or signed board resolution? They should make a study first of their policy of zero fish pen,” said Mel Felix, a fish-pen operator. —WITH REPORTS FROM JULIE M. AURELIO AND MARICAR CINCO