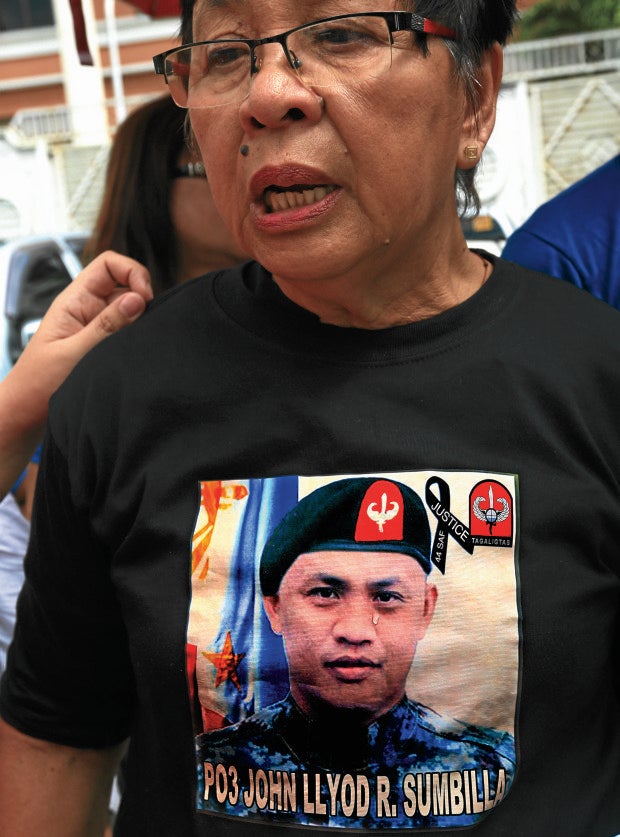 A tear shed by Telly Sumbilla, 64, falls on her shirt and onto the image of her son, PO3 John Lloyd Sumbilla, one of the 44 police commandos slain in the Mamasapano massacre two years ago. —EDWIN BACASMAS

The bereaved kin of nine elite troopers killed in the bloody police operation in Mamasapano two years ago still believe the buck should stop with former President Benigno Aquino III.

“Our sons’ bodies were mutilated. And until now, no one has been held liable. Those who abandoned them, those who ordered this, where are they now?” Sumbilla asked.

“Up to now, there is no justice. Where is justice for them? These were police officers, on an ordered mission. And now, they’ve just been forgotten.”

“If it weren’t for the President’s orders, all this wouldn’t have happened,” said a grim-faced Felecitas Nacino, mother of PO2 Nicky Nacino Jr.. “The [Moro fighters] wouldn’t have attacked if they weren’t attacked.”

Nacino, along with nine other families of the “SAF 44,” marched on the Office of the Ombudsman in Quezon City to press demands for swift action on criminal complaints filed against Aquino, sacked Philippine National Police Director General Alan Purisima and retired SAF commander, Director Getulio Napeñas.

After Aquino stepped down from office, the families, represented by lawyer Ferdinand Topacio and backed by Volunteers Against Crime and Corruption, Citizens Crime Watch and Bayan, filed in July last year charges of reckless imprudence resulting in multiple homicide against the former President.

The Ombudsman on Tuesday filed in the Sandiganbayan charges of graft and usurpation of official functions against Purisima and Napeñas for bypassing the PNP chain of command. Aquino was not among those charged on Tuesday, seven months after the complaints had been finalized.

“It is, of course, Aquino, down to Purisima, who should answer for this tragedy,” said Dennis Tria, uncle of Senior Insp. Max Jim Tria, reported to be the “last man standing” in the Mamasapano firefight.

“The culpability is with Aquino,” Tria said.

But for Nita Sagonoy, aunt of slain PO1 Joseph Sagonoy, the SAF trooper whose grisly death was video-recorded by his assailants, the liability lay with both those who killed him, and those who ordered him to go on the botched mission.

“This wouldn’t have happened if they hadn’t ordered it,” Sagonoy said.

Topacio said the Ombudsman’s filing of graft complaints in the Sandiganbayan against Purisima and Napeñas was “useless, empty.”

“Given the timing, [the Ombudsman] was just throwing the people a bone,” Topacio said during a press conference before the march.

“This was just for graft and usurpation. Giving the Ombudsman the benefit of the doubt, perhaps Aquino wasn’t guilty of graft or usurpation of public functions. But this is a different ball game—44 counts of reckless imprudence resulting in homicide,” Topacio said.

“This is the acid test for the Ombudsman. Who will she side with? The one who appointed her? Or the truth?” Topacio said.

Justice Secretary Vitaliano Aguirre II said there would be no closure to the massacre unless lingering questions were answered, including whether Aquino barred the military from helping the besieged SAF troopers.

Maj. Gen. Edmundo Pangilinan, commander of the 6th Infantry Division, still has to explain why he withheld artillery support for the SAF troopers when they were surrounded by Moro rebels and bandits in an isolated cornfield and when the SAF’s “circumstances” still warranted the military’s help, Aguirre said.

He questioned why probers failed to subject the mobile phones of the key players in the operation, from Aquino to ground officers, to forensic examination except for that of Napenas’.

“There would be no closure for the families left behind by this tragic incident. Even if Congress conducted several hearings on this, so many questions remain unanswered,” Aguirre said.

Is one terrorist worth the lives of 44 men?

“It was worth it,” Chief Supt. Noli Taliño, deputy SAF commander at the time of the massacre, said at a Mass for the slain troopers in Cebu City on Tuesday. “The motto of SAF explains it plainly: Ang tagapagligtas (the savior.)”

He said that had Marwan not been killed, the bombmaker would have caused more carnage among innocent civilians.

Senior Supt. Dionardo Carlos, the PNP spokesperson, said a new board would study whether the 42 other troopers should receive the medal of valor. Only two of them did. —WITH REPORTS FROM JEROME ANING AND ADOR VINCENT MAYOL