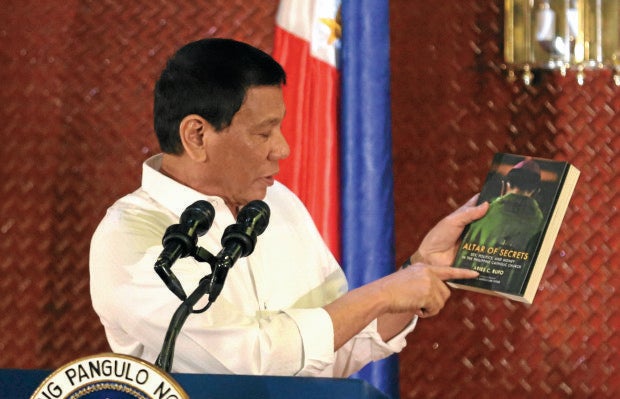 President Duterte holds a copy of the book “Altar of Secrets,”which he misquoted to launch new attacks on the Catholic Church. —JOAN BONDOC

A ranking official of the Catholic Bishops’ Conference of the Philippines (CBCP) on Wednesday said the Church would continue to criticize President Rodrigo Duterte’s war on drugs, after the foulmouthed leader attacked the clergy anew on Tuesday, saying the Church was “full of shit.”

But the Church would also continue to be “understanding” and “very patient” with Mr. Duterte, who also said bishops were “corrupt” and “womanizers” like himself.

“Even before, the Church has been very, very understanding, and very, very patient,” Fr. Jerome Secillano, executive secretary of the CBCP’s Permanent Committee on Public Affairs, told the Inquirer.

“We just need to understand the President. I think [his tirade] was an outburst born out of anger,” Secillano said.

The CBCP desires to end all the bickering between the Church and the President, Secillano said, but added that Church leaders will continue to speak against the methods employed by the Duterte administration in its campaign against illegal drugs.

More than 7,000 people have been killed by police and unknown assailants since Mr. Duterte launched his war on drugs after taking office in June last year.

Church not the enemy

“The Church is not the enemy of the President or of the government,” Secillano said. “We have the same intention to end criminality and the drug problem, but perhaps we differ in strategies.”

The Church also wants to punish criminals, he said.

“We do not condone criminality, but we continue to emphasize that [punishment] must be done in a legal manner,” he said.

Referring to the dialogue with bishops proposed by presidential spokesperson Ernesto Abella, Secillano said the decision was in the hands of the majority of the Church’s leaders.

Mr. Duterte’s latest attack on the clergy came at his meeting in Malacañang on Tuesday with families of 44 Philippine National Police Special Action Force commandos who were killed in a clash with Moro rebels in

In a profanity-laden speech, Mr. Duterte encouraged the families of the slain police commandos to read the book “Altar of Secrets: Sex, Money and Politics in the Philippine Catholic Church” by the late journalist Aries Rufo to discover the sins of Catholic bishops in the Philippines.

“I challenge you now. I challenge the Catholic Church. You are full of shit. You all smell bad, corruption and all,” Mr. Duterte said.

He dared the bishops to resign, saying he would do the same if they stepped down.

Commenting on Mr. Duterte’s attack on Wednesday, Lipa Archbishop Ramon Arguelles said bishops could resign only with the approval of the Pope.

According to Mr. Duterte, he and Catholic Church officials have the same sin—womanizing.

He singled out Bishop Teodoro Bacani, who he said had two wives like him.

Bacani, bishop emeritus of Novaliches, responded on Wednesday, denying he had two wives.

“If he [said] that, I pity him. It sounded crazy. I pray for him,” Bacani said in a text message.

“I do not have even one wife. I hope anyone who says I have two will produce even one. Poor guys who can only use lies versus truth,” he said.

But he added that if Mr. Duterte did not have immunity from suit, he would bring defamation and libel charges against him.

“There is no proof yet of the accusations against Bishop Bacani,” Arguelles said. “Besides he has already resigned.”

Bacani resigned in 2003 after being accused of sexual harassment by his personal secretary.

During the World Apostolic Congress on Mercy held in Manila recently, Bacani bewailed the spate of extrajudicial killings in Mr. Duterte’s war on drugs, calling the Philippine National Police a “bringer of death.”

Mr. Duterte said that unlike the bishops, he was not corrupt.

He chided the bishops for asking for vehicles, including Pajeros, from the government during the time of President Gloria Macapagal-Arroyo.

“Shouldn’t you be ashamed of yourselves? That’s so expensive and so many people have nothing to eat,” he said.

Mr. Duterte said the bishops knew they were not supposed to receive anything from the government, and yet they asked for Pajeros.

“Son of a bitch, the fools accepted it,” he said.

“It was pure graft and corruption,” he added.

No one found guilty

Arguelles said none of the bishops had been found guilty of soliciting vehicles from the Arroyo administration.

He said the vehicles given to the bishops were intended for the Church’s social action for the poor.

The bishops returned the vehicles amid a Senate inquiry into the controversy.

Mr. Duterte said he had been aware of clerical indiscretions since he was a young boy, and he railed against priests who refused to serve the poor.

He said he just might write  a book about Church officials and he would title it “Hypocrisy.”

Mr. Duterte noted that Church officials call politicians corrupt. “How about you?” he asked.

Most politicians are afraid of offending Catholic Church officials, but not him, Mr. Duterte said.

Despite Church officials “politicking” and warning people against voting for him during the campaign, he still won the election, he said.

Arguelles acknowledged that clergy guilty of serious offenses should resign.

“A bishop or priest who is guilty of a serious offense should indeed resign if their continued stay in their position harms the Church and the faithful,” he said.

“We bishops have a mandate from God, appointed by the Holy Father. We can resign only to the Pope, not to anyone, even to the President,” Santos said.

“We have our shortcomings and sometimes we fail but we are contrite and rise up. And God forgives and trusts us again and again. God will never resort to our past. Let God be our judge. Let our people decide for us,” he said.

“He is entitled to his opinion. Doctors should not stop healing people just because they get sick. Nobody is perfect,” Ongtico said.

“These are mere words uttered thoughtlessly, not worthy of consideration,” Bastes said.

“When insulted, the Lord Jesus has taught us not to retaliate. We should rather respond with prayer,” said Msgr. Joseph Tan, media liaison officer of the Archdiocese of Cebu.

While bishops, priests and a number of lay people were hurt by Mr. Duterte’s attack, Tan said it was improper to be angry.

“Let us not be carried away by emotions and react negatively. That is not fruitful,” he said. —WITH REPORTS FROM TINA G. SANTOS IN MANILA; MARICAR CINCO, INQUIRER SOUTHERN LUZON; AND ADOR VINCENT S. MAYOL, INQUIRER VISAYAS